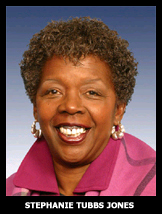 Early reports that Rep. Stephanie Tubbs Jones had died were incorrect, however her condition appears to be very serious.

Democratic U.S. Rep. Stephanie Tubbs Jones, the first black woman to represent Ohio in Congress, had a brain hemorrhage and was in critical condition with limited brain function, a doctor said Wednesday.

Tubbs Jones, 58, suffered the hemorrhage while driving her car in Cleveland Heights on Tuesday, said Dr. Gus Kious, president of Huron Hospital in East Cleveland. The congresswoman had been driving erratically and her vehicle crossed lanes of traffic before coming to a stop, police said.

The hemorrhage was in an inaccessible part of the congresswoman's brain, Kious said during a news conference. A team of doctors who evaluated her determined she has limited brain function.

Update 4:31 p.m. PDT: The Associated Press and C-SPAN are reporting that Rep. Tubbs Jones died at 6:12 p.m. EDT today, in Cleveland. Our thoughts are with her family.

« PREVIOUS STORY "The BRAD BLOG Goes to the DNC..."
» Go to The BRAD BLOG front page «
"In Memoriam: Stephanie Tubbs Jones" NEXT STORY »

Now what am I going to watch on C-Span, she was always my favorite...Direct and to the point.
A true Patriot.
My condolences to her family.

DAMN! I really like that lady. She makes a lot of sense. If any of you have any influence with God, pray for her early complete recovery!

Family and Huron Hospital officials said at a 2:30 p.m. news conference that Tubbs Jones is on life support and on a ventilator, and has “very limited brain function” as a result of a massive brain aneurysm...

I hope she rots in hell just like you wished on Tim Russert.

You are aware that she hasn't died, right?

So you're wishing for her death on top of her rotting in hell?

Tim Russert, on the other hand, helped Cheney & Pals lie the country into a war that has meant the deaths of thousands. I'm pretty sure there's a special circle for that kind of treason, so if anyone wished a trip to hell on him, at least there's some justification.

What the hell did Tubbs-Jones ever do to you other than have the misfortune of having a debilitating brain injury when you've got a grudge against someone's opinion?

I just heard about her passing. There are, of course, trolls and other idiots who wish her ill, even now - but her destination is otherwise. She'll be at Jesus' right hand, as she was in life.

I feel compelled to point out that Smithy has as much right to wish her rotting in hell as anyone else has to wish her resting in peace or with Jesus. I don't think she had as much to repent as Tim Russert, and Smithy probably doesn't either. He's just lashing out. We don't have to make a federal case out of it.

I feel compelled to say that no one has said Smithy can't say what he said.
Russet enabled the criminals but I do not recall anyone on here saying Russet should rot in hell though? What did Rep. Jones do that would warrant a comment like that.

Here, refresh your memory. It isn't what Rep. Tubbs Jones might or might not have done, I'm sure. Her status as a Democrat is enough to "warrant" a comment like that in the minds of some, and the same is true of others' status as Republicans for some Democrats, as I'm sure you can agree. It just doesn't matter.

I am very sorry she is gone. She tried very hard to fight the stolen election in 2000. I don't know anything else about her record, and I pretty much blanketly hate the 110th Congress, but I'm sorry she's gone because of that alone.

It's not worth huffing and puffing about others wishing the dead ill, ever, because the offended party is dead, but especially not now when there is so much else needing our energy and attention. If there is reason to think she was murdered, that's a whole other ball of wax.

Looking back, I sure wish one Senator would have stood up and supported her when contesting the rigged Ohio election count.

I only wonder if the reason no Senator would support her was because they don't want honest elections.

Look at all the damage the Senators and the unelected President has done since then.

Destruction of the economy 100 trillion dollar debt (to be fair democrats and republicans have allowed this to fester unabated), to be paid by taxpayers. Never ending wars. Inflation. The shredded Constitution. Crumbling infrastructure. On and on..

If I had a time machine, I would go back and repeat that day, but first get some Senators to back her. Imagine how many less people would be dead now had Gore taken office. If only one Senator would have stood up that day.

What a mess our country is in now.

I thank Stephanie for realizing the vote was completely cooked, and trying to stop it that day.

Shame on the Senators for not backing her up. Not one Senator.

I just realized there's a question as to her death. If she is alive (no thanks to the media), I hope she get's better.

Al Gore asked the senators not to support it. He wouldn't fight the Supreme Court. In his defense, he could not foresee just how big a travesty a * presidency would be. He thought he was doing the right thing.

A reminder: There have absolutely been commenters here who just snickered about Tim Russert's death and then gone on to wish death and trips to hell for anybody connected to Fox News. So don't act all sweet and innocent here. Left-wing hate speech can easily be found in previous comments at this site.

For the record: While I think Rep. Jones' objection to the 2004 election was a total waste of time (because I don't think the election was stolen), I do not revel in her death. My condolences go out to her family.