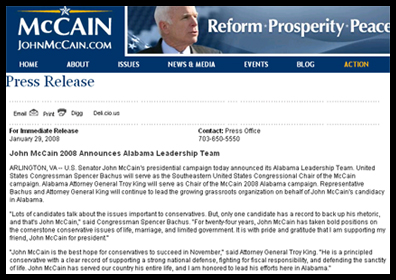 King, who is known for extremist views on religion and who has frequently made homophobic statements, including calling gays the "downfall of society," is the subject of rumors that his wife recently discovered him having sex with another man.

The story about King had been published at Wonkette and on numerous gay news websites, but none of them had reported King's connection with the McCain campaign before we published the story, "McCain’s Alabama Chairman Reportedly Outed - Attorney General Troy King Has a Record of Homophobic Rhetoric," at Pensito Review on Friday.

We happened upon the scrubbing of the campaign website as we did fact-checking for the article. At about 2:30 p.m PDT, when we checked the McCain campaign website, we found a news release from January on this now-blank page announcing the Alabama politicians who had joined McCain's "leadership team." The list included King, who was indeed named state campaign chairman.

A few minutes after we published the article, a reader left a comment alerting us that the link to the McCain website led to the blank page that is there now.

A search on the campaign site for "Troy King" returned no results, however a Google search for "Troy King" and "John McCain" still produced a link to the now-blank McCain campaign webpage near the top of the results as of 4 p.m. Friday.

We happened to have the webpage open and so made the screen capture of it and grabbed the text:

"Lots of candidates talk about the issues important to conservatives. But, only one candidate has a record to back up his rhetoric, and that's John McCain," said Congressman Spencer Bachus. "For twenty-four years, John McCain has taken bold positions on the cornerstone conservative issues of life, marriage, and limited government. It is with pride and gratitude that I am supporting my friend, John McCain for president."

"John McCain is the best hope for conservatives to succeed in November," said Attorney General Troy King. "He is a principled conservative with a clear record of supporting a strong national defense, fighting for fiscal responsibility, and defending the sanctity of life. John McCain has served our country his entire life, and I am honored to lead his efforts here in Alabama."

John McCain thanked the leadership of his Alabama campaign. "As a representative in the United States Congress, Spencer has displayed his commitment to the people of Alabama," said Senator McCain. "Troy is an outstanding public servant and passionate advocate for the rule of law. Both of these men are dedicated to the principles of limited government and traditional values that we share. I'm proud to have Republican leaders and dedicated public servants like Spencer Bachus and Troy King leading my campaign to victory in Alabama."

I like the little womans taste in curtain...er dress

You are a rotten kid. Thanks!

This was a comment on a huffingtonpost story today:

These all sound like legitimate questions to me. Questions I think Mr. Obama should be asking.

Wilburrr... ~ Make sure you always knock on closet doors before entering ..... there may be republicans in there . . .

Alabama is one of numerous states where leadership is dishonest. Troy King had been in the news recently on two occasions: he'd admitted of dishonest and corrupt voting practices in several Alabama counties which involved both, Democrats and Republicans. He'd refused to believe U.N. reports that the justice system of Alabama was corrupt in fact, wrongfully imprisoning, even executing innocent prisoners. Everyone is well aware of Alabama's kangaroo courts in imprisoning former Governor Don Siegelman, while one of the battles involved was lottery vs. casino - and Jack Abramoff, the "chitster" of Apartheid, Iran-Contra, and the Western Hemisphere.

Troy King, as Tom Feeney(YANG, Lemme,) Cannon, a common name in politics, and politicians from four (GA,FL,AL,NV) states, was a "Strategum Group" client, where, the double murder/suicide of Gonzalez and Abrami successfully and rapidly disappeared from news media reports and investigations.

Because Alabama's incarceration of a Governor involved casinos vs. lotteries, would be good for internet bloggers and investigators to search casino/lottery oriented corporations, companies, to find former military officers and politically connected entities present and seated with interests in Scientific Games, communications, (AOL) and the casino industries.

Some have said "It's the 4th Reich," and while this writer anxiously awaits confirmation that rumors concerning Troy King are valid, still Alabama holds many answers in other areas regarding massive public corruption at the highest levels of government.

It's also host for ThyssenKrupp now schooling employees in German, and many NASA/Aerospace related organizations and corporations.

The other areas to investigate, are those private companies the "REICH" seems preoccupied with to enhance, and enrich, like Blackwater, and numerous others. These are old, established companies who own prisons, construction, railroad outfits, and can operate in secret without checks and balances and network with others.

Trent Lott enjoyed perks from many of these, along with tobacco companies, and at this writing "The Facility Group" of Georgia is in the hot seat. Lott's brother-in-law is also in the hot seat and a good investigator would know whether these two connect, if through nothing else, the small town Lott's relative operated from.

There's so much more! Rumors pointed Strategum and gunman Jason Drake to Congressman McHenry of the Gastonia area of N.C., while former (indicted) Republican USAF Governor Fletcher of Kentucky was reportedly invested there, as well as in Destin, Florida.

Americans aren't on a "gay witch hunt," but they're more interested in the fact that the system they're living in, is and has been dishonest. What's worse, it appears to be rigged in placing already-compromised individuals in high offices, who can be destroyed if they fall out of compliance with the "REICH KINGS."

That an Ingram is involved in McCain's campaign isn't surprising. Could it be the same Ingram family of Tennessee affiliated with a particular huge (REGIONS) bank in Alabama?
Rumors?

Could it all be rumors?

And where's Karl Rove? In Sweden giving political advice, or taking it?

Maybe he's in the Netherlands where private, European-owned CCH company has all of our American laws databased for their law and tax book businesses for the White Western World's "Compliance" industry. Or maybe he's speaking with the Germans who own our public water systems.

Come on, John! Stand by your man!

Joan at #3, that was my comment, and if you know of any way to get those questions to someone in the Obama campaign I would be truly grateful. They need to be asked.

I just Googled Troy King McCain and got thousands upon thousands of incriminating websites. Try it for yourself and see.

Perhaps the rumors about Troy King's gay sex tryst are true as reported. However, the story remains unconfirmed up until now. One report I read suggested that Alabama Governor Bob Riley was behind the circulation or promotion of these rumors, yet when queried by reporters denied the King gay sex tryst story.

It may be the story is a false rumor being circulated as a part of other intrigues related to King's close association with Gonzalez and Riley, and Troy King is being set up as a fall guy of sorts.

This is purely speculative, but with so few real facts available at this point, that is about the same as what anybody else has right now.

yeah - but hadn't you noticed that whenever a Republican Pol inveighs against homosexuality he turns out to be as queer as a nine dollar bill; whenever he starts pontificating about "Family Values" he gets revealed to be a serial adulterer, and when he starts talking about "Honesty" he has his hands in the till up to the elbows? In fact, it seems that the noisiest elements of the Party are mostly clumsy hypocrites. It is to be expected that the functionaries of the Party are all in favor of the voting machines that can be easily rigged to steal elections.

Wayne Madsen had this story a few days ago and I am glad to see some other alt-press venues giving it some air.

He connects the dots to the Russian-Israeli mob, Abramoff and Charlie Crist that you might be interested in...

From the members board...

Alabama's Republican Attorney General Troy King, a major persecutor and prosecutor of former Democratic Governor Don Siegelman, has been kicked out of his Montgomery home after his wife, Paige King, discovered Alabama's top law enforcement official was engaged in a homosexual tryst with an assistant in the couple's own bed. King was a top official in John McCain's presidential campaign in Alabama and was mentioned as a strong GOP gubernatorial candidate in 2010.

King was known as a virulent anti-homosexual critic having penned anti-gay letters to the Crimson White, the student newspaper of the University of Alabama. He once wrote that the Gay and Lesbian Alliance on campus was "an affront to the state of Alabama [and] its citizenry." King also called homosexuality the "downfall of society." Perhaps most controversial was his proposed legislation to ban sex toys in Alabama. Under the proposed law, anyone found with a vibrator in their possession could be jailed. It is not known whether King was using any sexual implements when he was caught by Mrs. King in bed with his male aide.