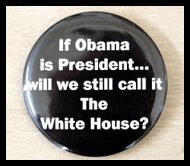 Updating a story The BRAD BLOG reported on Monday, the Texas Republican Party has now moved to distance itself from a vendor who sold buttons at the party's state convention that bore a racist message about Barack Obama: "If Obama is president ... will we still call it The White House?"

According to The Conservative Voice, the Texas GOP says it will donate $1,500 in rent paid by the button's vendor, Republicanmarket.com, to victims of the flooding in the Midwest.

Said Texas GOP spokesman Hans Klingle, "This vendor need not apply to another Texas GOP state convention. We will neither tolerate nor profit from bigotry."

How "conservative" is the Texas GOP? The Conservative Voice notes that in "1998, the Log Cabin Republicans, the nation's largest organization of gay Republicans, was denied a booth at the GOP state convention in Fort Worth and likened to the Ku Klux Klan by a Texas Republican Party spokesman. 'We don't allow pedophiles, transvestites or cross-dressers, either,' then-GOP spokesman Robert Black said at the time."

The fact that the Texas GOP has shifted to the left on an issue like this backs up assertions by Arianna Huffington and others that liberal positions are increasingly becoming mainstream.

I believe this story released by the Republican Party of Texas is a fake and here's why.

I then did a search for the button and could not find it anywhere, only articles about it and how the Republican Party of Texas was quick to condemn such a "disgracefully insensitive button." But I did find out that the owner of the company said he only made 12 (as a joke) and sold only 4 - 2 of which went to reporters

Since when do Republicans care about sensitivity? This leads me to believe that this is just an attempt to say, "Hey, look at us. We're not racist!" Clearly, this button was sold at the convention with the intent of making a media spectacle.

"Racist Obama Button" allows Repubs to talk about the button without supporting the button, which gets the button distributed everywhere. This is the basis of buzz.

I tried to follow the trail, too, imdougandirule Comment #1, and it leads to nowhere. This is really a textbook execution of guerrilla marketing 101.

Interesting. And note that they can expect to get a lot of good publicity for giving $1500 to flood victims that are mostly white and middle class.

I'm actually kind of surprised that the BradBlog hasn't come forward with new information exposing this fraud the way they did with the Brian Bilbray/Diebold sleepovers in the 2006 special election to replace Duke Cunningham.

Chasing down a few stinking racists cannot be compared in any way to exposing the mechanisms of election fraud. One would be harassing creeps for being creeps, the other was exposing one of the most serious threats to our republic in our entire history....

I was also in no way trying to detract from the original message of this article that liberal values are seeping into the far reaches of our culture as was the case in the early 90's. Kudos to liberals everywhere for keeping their heads high during these dark times.

Although, I wouldn't mind seeing something somewhere notable calling them out on this. I posted it on my blog, but I only have about a half dozen friends (+/-) who read it. Heh! Heh! (Your blog is really well done, hope you don't mind if I add it to my favorites.)

p.s. I don't know about you, but I was really disappointed by the lack of response by the Busby camp when Brad exposed the Diebold sleepovers. I thought she should have fought for it right then and there - she had the ammunition - rather than wait for November to try and unseat an incumbant.

For what its worth, I saw the buttons and stickers. There were not a whole lot of them nor were they front and center but they were there. Everyone who I talked to at the convention said they thought it was in poor taste and should not have been done.