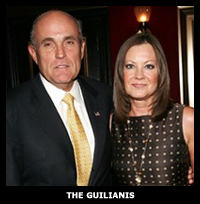 Yesterday, we learned that when he was mayor of New York, Rudolph Giuliani allegedly played a shell game to hide from taxpayers --- and his scornful wife --- the cost of dragging his security details along when he traveled out to Long Island to visit his then-girlfriend, Judith Nathan. Now comes news that he assigned a car and driver from the NYPD to Nathan during their affair:

Well before it was publicly known he was seeing her, then-married New York Mayor Rudy Giuliani provided a police driver and city car for his mistress Judith Nathan, former senior city officials tell the Blotter on ABCNews.com.

"She used the [police department] as her personal taxi service," said one former city official who worked for Giuliani.

The former city officials said Giuliani expanded the budget for his security detail at the time. Politico.com reported yesterday that many of the security expenses were initially billed to obscure city agencies, effectively hiding them from oversight.

Last December, Alan G. Hevesi, the New York State Comptroller, pleaded guilty to defrauding the government and resigned his position after it was revealed that he had detailed a state employee to attend his wife, who was an invalid:

Mr. Hevesi, the state’s top fiscal watchdog, told the court in a hoarse voice that one of the state workers he had assigned as a driver for his wife, Carol, had done much more than provide security for her. Prosecutors filed court papers revealing that the worker had also watered her plants, driven her to Bloomingdale’s and dropped off her dry cleaning.

No word as of yet whether New York's Democratic governor, Eliot Spitzer, will look into allegations that Giuliani used public employees to carry out personal services for him and his girlfriend.

« PREVIOUS STORY "GOP Senator: Bush Administration 'Most Arrogant, Incompetent Ever'"
» Go to The BRAD BLOG front page «
"Despite Reports, California Electoral College Split Initiative Has NOT Been Withdrawn" NEXT STORY »

READER COMMENTS ON
"As Mayor, Giuliani Used Police as Limo Service for Mistress"
(22 Responses so far...)

To encourage rejection of the results, the CIA proposes:

Make a note of these tactics, if they work up here, they'll work down there.

Flo, I found that information at venezuelanalysis a couple days ago, but just now I find that Larry Johnson is having none of it. I heard a guy from venezuelanalysis on a netcast the other day and he is very well informed... but he did sound awfully biased in favor of Hugo Chavez. That is my inclination, too, and so I try to fight it as much as possible to better see what might be so, and... well... I'm thinking Larry might be pretty close to right.

I have no doubt we're doing all kinds of ugly stuff down there, maybe even everything in the probably-bogus memo, but those of us rooting for the right side in the class warfare need to be very careful....

on the Howard Stern Show unlike the chicken shit dems I.E horse face . . .

Of course, Democracy Now! had a pretty good interview on it that does not jibe with Larry's take at all.

will be getting fuel assistance courtesy of Joe Kennedy / Hugo Chavez.

COLD KILLS in parts of this cuntry courtesy of the bush's.

Wingnut is captured at Hillarys campaign office.
(the tie always gives it away)

I don't know what to think about all that 99, the local channel down here has been pumping anti Chavez stuff all day though...we'll see

"Yet the latest polls suggest he could lose."...bullshit

Here's how George Stephanopolis spun it on World News Tonight

The pro-Chavez people were out in the streets today numbering in the tens of thousands. (showing from above a sea of red shirts)

The anti-Chavez were out yesterday numbering 100,000 (showing from ground level)

Recent History Shows Use of Fake Polls, Other Efforts to Undermine Credibility of Electoral Process

For Immediate Release: November 28, 2007
Contact: Dan Beeton, 202-293-5380 x104
WASHINGTON, D.C. - There is a significant risk that fraudulent polls and other deceptions will be used to challenge the results of Venezuela's referendum, if proposed constitutional reforms are approved this Sunday, according to Center for Economic and Policy Research (CEPR) economist and Co-Director Mark Weisbrot.

"The international media has not always exercised due diligence in its reporting on polling data and elections in Venezuela," said Weisbrot, who has authored papers on previous elections there.

"This opens up the possibility for the use of fake polling, as was done in the last (2004) referendum, to cast doubt on the results if the proposed constitutional reforms are approved," he said.

In 2004, the influential U.S. polling firm Penn, Schoen, and Berland published fake exit polls on the day of the Presidential recall referendum, showing President Hugo Chávez losing by a 59-41 margin.(1) The actual results, which were certified by observer missions from the Organization of American States and the Atlanta-based Carter Center, showed the opposite, with Chávez winning by a margin of 58 to 41 percent.

Penn, as in Mark Penn ? as in Burson-Marsteller Mark Penn?
Link

I've been thinking about it all day, and whether or not Johnson's right about that memo, I've now heard too much cogent refutation of some of the recent news about the protest against Chavez. I'm just sick about this stuff. I think Johnson's just trying to avoid thinking about the killers who used to be his co-workers.

It's totally bi-partisan if you think about it 99, like 'how did our oil get under Venezuelas ground ?'

Yes. The fascism is totally bipartisan. It's always about filthy lucre!

We've been swimming in credit card receipts from Rudy Giuliani's administration today, and one thing in particular has struck us: in 2001, apparently with an eye to future globetrotting, Giuliani's administration sent a check for $400,000 to American Express. Though it was billed to the Assigned Counsel Administrative Office, an office that provides lawyers for indigent defendants, the money served as an advance against future travel and other expenses later incurred by the mayor's office and his security detail.

The unusually large prepayment, as yet unreported, adds weight to the theory that the Giuliani administration was using accounting gimmicks to obscure his office's travel expenditures.

With $400,000 prepaid on the Amex account, the mayor and his staff drew down on the credit card for a number of trips, including a handful out to the Hamptons, where Judith Nathan had her condo. Giuliani's administration ultimately spent approximately $100,000 of the $400,000 before leaving office in January, 2001.

Stu Loeser, a spokesman for Mayor Bloomberg, confirmed to us that his administration put a stop to the practice of putting funds for future travel in bulk on a credit card. Shortly after Bloomberg took office, American Express refunded $298,000, the remaining unused balance on the account. The move came shortly after the city comptroller sent the mayor a letter critical of the Giuliani adminsitration's practice of billing obscure city agencies for mayoral travel expenses.

But Loeser declined to comment when asked directly why the administration did this, and declined to comment when asked directly if the Bloomberg administration thought the Giuliani approach was problematic. "We process spending and travel differently," he said. "We use a different method. If we have government funded travel, we go through the city's travel agent."

Prepaying a city credit card with such a large amount is a procedure that "appears intentionally opaque," a high-level budget official under a previous administration told us. "You're not able to see clearly what [the money] is being used for," the official said, "because it's bundled in an AmEx card as opposed to as direct payments to vendors."

The unusual $400,000 prepayment is revealed in a letter from Giuliani's deputy director of fiscal operations that was contained in a package of documents City Hall released today, in response to reporters' questions about Wednesday's Politico story. You can see the letter here.

Giuliani's administration had done a similar thing in June of 2000, cutting checks for $54,000 worth of "prepayment" and billing them to the New York City Loft Board and other backwater agencies.

This comment at TPM Muckraker sums it up so very well,..

Rudy had spent many years cultivating the warm family image of being NY's First Family: beautiful blonde, TV-anchor wife Donna, pretty young daughter and rambunctious, slightly goofy young boy, Andrew. In his first term, all those Yankee games showed Andrew at his dad's side. This was all necessary since he was aiming at Sen. Moynihan's seat when the old man stepped down. Rudy knew full well that the lothario part of his life would ruin any (then very good) shot he had at the Senate. He knew the Clinton camp would have a field day with it after he had piled onto Bill's problems with priggish, nasty quotes. THIS is why he kept it hush-hush for two years. Then, his humongous ego got the better of him, as his wife Donna began griping louder and louder about her husband embarrassing the family by fucking anything that moved. He dragged Nathan into the public eye as much to shove it into the face of the woman he had married, as to proudly show off his new love. His whole M.O. at the time was, "Because I CAN!"

Also, keep the correct focus as this story unfolds: It's not the police detail's expenses that are at issue here; it's the EXTRA police detail expenses that had to be hidden. No one cares (nor should they) who he's been screwing, when. What's at issue here is malfeasance, meant to CYA. The NYC mayor gets a detail 24/7. Their pay is in the budget, as was his family's details' expenses. If Rudy had simply stayed home with his wife and kids, like the ideal family man he worked so hard to create for us, he would never had incurred extra expenses for gasoline, hotels & meal per diems, and occasional airline bills that would have exposed his actual activities and become fodder for the NY press, ruining his shot at becoming NY's junior Senator. But, as often happens, Mr. Johnson got in the way. Mr. Johnson even ordered a police car and driver for his girlfriend, a police detail to guard her NYC apartment building and her Hampton's condo. All at taxpayers' expense. All on top of what was already allotted for the details for his family members. Somehow, Rudy felt that HE was owed that money by the City of New York for his plaything. THAT's why these expenses had to be buried.

Radio for Butt Pirates by Pirates and Broadcasted by Pirate on WBCQ
(photo's some kids got all the toys)
Lefty Radio from the right coast ... Radio New Your International.

the cadaverlac has chickadee plates on it.

Giuliani parody,.. so much more to come if he wins the Republican Party nomination.