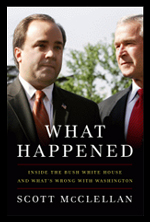 The title of former Bush flak Scott McClellan's new book, "What Happened" brings to mind the title of O.J. Simpson's recent allegedly fictional memoir, "If I Did It."

Perhaps it's because both books seek to exonerate their authors from much deserved guilty verdicts --- both in the court of public opinion and in courts of law, certainly in O.J.'s case, and maybe even for Scotty too.

Here's an excerpt from Scotty's book:

The most powerful leader in the world had called upon me to speak on his behalf and help restore credibility he lost amid the failure to find weapons of mass destruction in Iraq. So I stood at the White house briefing room podium in front of the glare of the klieg lights for the better part of two weeks and publicly exonerated two of the senior-most aides in the White House: Karl Rove and Scooter Libby.

There was one problem. It was not true.

I had unknowingly passed along false information. And five of the highest ranking officials in the administration were involved in my doing so: Rove, Libby, the vice President, the President's chief of staff, and the president himself.

And this was not just run of the mill political spin. Rove, Libby, Ari Fleischer and others, including Colin Powell's righthand man Richard Armitage, leaked the secret identity of a CIA agent whose specialty was tracking WMD. And they did it at the behest of the vice president who eagerly jeopardized state secrets for the tawdriest of purposes: to do political damage to the agent's husband, Joe Wilson, because he had dared to expose a lie told by the president in his 2003 State of the Union speech about Iraq seeking uranium from Niger.

The CIA, of course, can't reveal how many illegal weapons were successfully transported into the Middle East or how many foreigners acting as U.S. agents were permanently sidelined --- or captured or killed --- as a result the treasonous act of outing Agent Plame by George Bush, Dick Cheney and their henchmen.

Only Armitage has expressed regret about the leak.

Scott McClellan shredded his credibility for Bush, Cheney and the rest. Surely he can't expect anyone to believe he is telling the truth now when he claims he was misled by these same people. He is either the most gullible person to walk the planet, or he thinks the rest of us are fools.

READER COMMENTS ON
"Scotty McClellan Strikes Back"
(8 Responses so far...)

You forgot one big 'player', Dick Cheney...who is currently on the road to impeachment for his crimes.

You could see that Scott had much more difficulty lying than the rest of them . . .

And they did it at the behest of the vice president who eagerly jeopardized state secrets for the tawdriest of purposes: to do political damage to the agent's husband, Joe Wilson, because he had dared to expose a lie told by the president in his 2003 State of the Union speech about Iraq seeking uranium from Niger. Ponder

Jon....you may want to consider the Wilson Smear angle/story as being total Rovian mis-direction. Did the smear ever work? No.

The true target was Blames covert company Brewster-Jennings that they needed out of the way so in 'no pissant CIA agent would be there to mess up ther Iranian war plans.'

Everytime I hear the Wilson Smear I want to scream because it detracts and distracts from the TREASON of their intentionally destroying Brewster-Jennings.

Plame was just to ethical for Rove/Cheney and they wanted her gone. Remember they spin and create the reality way ahead of most mortals. Good intelligence is their enemy and that's what her operation specialized in.

Iran was in the sights long ago and Plame's outing was pre-emptive planning. Cheney's office sent Wilson to set up the smear story to justify the outing and TREASON. Wake up Jon Ponder to the truth and quit regurgitating the Wilson Smear BS. Plame's outing was treason and wilson had nothing to do with it or its treasoness consequences.

Don't feel too bad Scott. We all knew you were a clueless patsy.

The shame of it is that you didn't know it.

Ok Snottie, you have a partial pardon for finally going straight truthful, but "not gunna doit ... wudnt be prudnt" until you bitch slap Jeffie for beamin you up.

Sorry JoJ for better or worse, the neoCons loose the White What House in 2008 ...