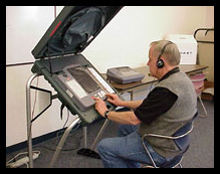 As anyone who has given electronic voting more than a cursory look knows, the "flexibility" of these computer systems is also their weakest and most dangerous link. This weakness was underscored in Houston earlier this week when Johnnie German, the Harris County administrator of elections --- with proper witnesses looking on, including representatives of the two major parties --- accessed the county's eSlate system and altered the tally of votes on a tax referendum from the Nov. 6 ballot, according to the Houston Chronicle:

German's late-night deed, said by officials to be a first-time event in the six years Harris County has used the eSlate voting system, has rekindled the debate about whether the newest electronic methods for counting votes should be trusted.

What German graphically demonstrated was that with the proper physical and informational access, one person can alter the results of an election in a county of 1.8 million registered voters.

One witness, John R. Berman, a computer expert representing the Democrats, was unpleasantly surprised at how easily the votes could be changed:

Behrman said he was shocked when he saw German use a series of passwords and an "encryption key" — a series of numbers on a nail file-size computer memory storage device — to reach a computer program that said "Adjustment."

"A hundred percent of precincts reporting, and everything had been distributed to the press," he said. "Then and only then did I see how they were going to do this, and frankly I never thought it was possible.

"Basically it turns out, without regard to any ballots that have been cast, you can enter arbitrary numbers in there and report them out in such a way that, unless you go back to these giant (computer) logs and interpret the logs, you wouldn't know it has been done."

In the two hours it took to enter the 326 segregated votes, the election duo made and corrected keystroke errors, Behrman said.

According to the Chronicle, the eSlate system was supplied to Harris County by Hart InterCivic in Austin, at a cost of $12 million.

Update: Many thanks to Pokey Anderson who wrote to say that the Chronicle reporter was not in the room when the votes were altered, as I had stated. I updated the story accordingly. Here's more from Pokey:

The eSlate is a Direct-Recording Electronic (DRE) device that uses a wheel rather than a touchscreen.

The person who oversees elections in Harris County is the county clerk, Beverly Kaufman, a Republican. She has refused a previous offer by Rice University computer scientist Dan Wallach to run parallel testing of the system. She has also rebuffed several citizen groups associated with several parties asking for something more credible than just electronic voting, such as paper printouts or paper ballots.

Kaufman's then-public relations officer David Beirne once was cornered by skeptical citizens as he spoke at the local chapter of the League of Women Voters. The citizens said they weren’t satisfied with “faith-based” elections or paperless electronic voting; they wanted transparency and authentic recountability. “Well. It’s ALWAYS been faith-based elections,” Beirne sniffed.

« PREVIOUS STORY "More Allegations of Corruption against State Dept. Chief Corruption Investigator"
» Go to The BRAD BLOG front page «
"In November 2006, Two Machines 'Smoked' - Only One Was Recalled" NEXT STORY »

Jon,
Thanks so much for getting this information to us!

Now I have even more proof to take to my county registrar (Orange County CA) who insists our Hart Civic machines will be just fine in the upcoming Primary!! When I questioned what they thought the most reliable method of voting would be, they responded: "You can be assured that your vote will be counted with any voting method you choose."

And Hart interCivic was the most security conscious of the three vendors (Hart, Diebold and Sequoia) reviewed in the California Top-to-Bottom-Review.

I concede being the best in this context is like being on the stern of the Titanic after hitting the iceberg; arguably the "best" place to be on the ship, but certainly not a "good" place to be.

Best is not the same as good.

Just think, if there were no witnesses! No one would know! Except the person rigging the election!