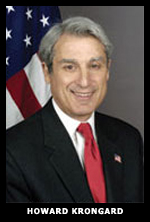 Howard Krongard, the inspector general (IG) for the Bush State Dept., has recused himself from a second major probe under his purview. The new recusal was announced yesterday and came at the "request" of House Oversight and Government Reform Committee Chairman Henry Waxman (D-CA).

This new development follows a dramatic moment during a hearing before Waxman's committee on Wednesday when Kronberg was forced to recuse himself from an investigation into Blackwater after it was revealed that, despite his earlier denials, his brother sits on an advisory board for the controversial paramilitary government security contractor. Making matters potentially worse for Krongard, his brother, Buzzy Krongard, issued a statement after the hearing contradicting Howard's testimony regarding the timing of when Howard learned that Buzzy had accepted a seat on the Blackwater board.

It is unclear at the moment whether Democrats on the committee will pursue perjury charges against the State Dept. IG.

Krongard's latest recusal stems from what appears to be obstruction of justice and witness tampering in a criminal probe by the Dept. of Justice into the way billions of dollars in contracts for the construction of the U.S. embassy complex in Baghdad were let by the State Dept.:

A report by the committee's majority staff referred to the Justice Department probe and also said that Krongard, against his staff's advice, met in August with someone implicated in "potential criminal activity" uncovered during a State Department audit of the embassy contract.

Then, the report said, Krongard met in September with someone else under investigation by the Justice Department. A source, speaking on the condition of anonymity, identified that person as [Mary French is the embassy project coordinator based in Baghdad]. When Krongard arrived in Baghdad, he was warned by his deputy that French had become a "subject of investigation" and that he should not meet with her, for fear of tainting the investigation. But, the report said, "Krongard went through with the meeting and spent several hours with this individual."

James L. Golden, an embassy project overseer who works on a contract basis for the State Dept. in Washington, and who is also said to be a subject of the DoJ probe, may be the other person of interest Krongard met with.

"That was at the request of Congressman Waxman's committee because they are doing their own inquiries into the new embassy compound," McCormack said. "Because of the reporting relationship between the IG and the Congress, of course, Howard honored that request."

Despite Krongard's removal from the two highest profile investigations by his office, McCormack says he still has the confidence of Sec. of State Condoleeza Rice.

Krongard's are corrupt cronies to the core. Buzzy is connected with AB Brown bank one of the banks involved in placing put-options just before 911. He's in on it too. They are just getting ready for the next lynchpin of 'their Master Plan" about which we have not a clue.Head for the hills...