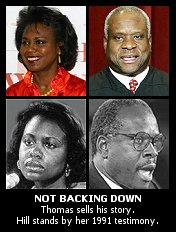 Anita Hill (Ah, those were the days! When Senate Judiciary Committee hearings actually made it onto network TV, and in prime-time no less!) writes in tomorrow's NYTimes that Clarence Thomas is still full of shit...

ON Oct. 11, 1991, I testified about my experience as an employee of Clarence Thomas’s at the Equal Employment Opportunity Commission.

I stand by my testimony.

She goes on to detail a few of the "blatant inconsistencies" that Thomas is still selling --- this time in hardback, and in an unprecedented hour-long Rush Limbaugh interview --- as well, she offers a reality check on progress since 1991 when it comes to the seriousness with which complaints like hers, of sexual harassment in the workplace by superiors, are taken.

Hill, now a law professor at Brandeis University and a visiting scholar at the Newhouse Center for the Humanities at Wellesley College, notes the character attacks which are still de rigueur against such complainants. She goes on to warn: "Our legal system will suffer if a sitting justice’s vitriolic pursuit of personal vindication discourages others from standing up for their rights."

You go, girl. 16 years on, however, and we still have no answer as to who placed that pubic hair on Clarence Thomas's Coke can. Little wonder he stays so quiet on the bench.

« PREVIOUS STORY "One Person, One Vote? Not in the Texas Legislature Apparently"
» Go to The BRAD BLOG front page «
"COLBERT VIDEO: War With Iran 'Evitable'" NEXT STORY »

I believe in affirmative action, but I have to acknowledge there are arguments against it. One of the more cogent is the presence of Justice Clarence Thomas on the U.S. Supreme Court.

Thomas is only 59; we'll be saddled with him, and that gigantic chip on his shoulder, for decades to come.

Horsehooey! Anybody who hears her speak understands that Anita Hill may be the only person in public life who may actually be dumber than George W. Bush. Tool of the left, witch hunt lady. This is a liberal speaking btb. I don't like Clarence Thomas, but I hate what the wimmin did to him.

I still believe Anita Hill. Just think about it - Clarence Thomas sits on the court like a bump on the log and all of sudden (16) years later he have something to say. I will never buy his book.

Uncle Thomas is a token if there ever was one totally beholding to the man.

After all the dumb republican canidates who didn't show up for the debates at the black college, this feels like a feeble attempt to show that they actually care about the black vote by parading thomas around. In MHO they're getting really easy to see through. God bless you Anita Hill!

Maybe we should be hearing from David Brock on this one once again. Remember the entire Right wing arguments against Anita Hill came from this man who later let america know that he was a hired hit man and that the magazine he work for gave him bogus info to put into his stories. Once he learned what was going on by the right he exited stage left and found that journalism actually requires backing up your data rather than publishing rumors handed to you by the editor.

David Brock is one of the only Rethuglicans I respect because he FULLY RECANTED, BEGGED FORGIVENESS, and has been DOING PENANCE ever since by founding Media Matters --- unlike so many other Rethuglicans who are now starting to talk anti-Bush when it is MUCH TOO LITTLE/MUCH TOO LATE.

As for Clarence Thomas, he was a lying, pathetic, piece of crap then (as if ANYBODY who went through law school and ran a law magazine and clerked could have "...never thought about Roe v. Wade at all in any context.") and he's a lying, pathetic piece of crap now. I really don't care if he's black, white, or yellow --- he's crap and he takes up one of nine privilaged spaces on a very important court, and in so doing, shows the United States of America to be a pathetic attempt at Democracy that can't even put respectible judges onto our top courts. The world must laugh at us more and more each day.

Welcome to the republikkkan's police state

... impeachment off the table. pelosi You "Pathetic Disgrace" add that to your Fuck'in memoirs

I agree with both PJ and CharlieL (to what extent that is possible). But I watched those hearings late into the night and saw the five or so women secretaries to Clarence Thomas testify that Clarence Thomas treated women with the ultimate respect and simply was not the type to sexually harass (and they said they "should know.") I read that Senator Joe Biden told them afterwards, "I agree with you, not with Anita Hill."
Is there nothing the left wing will not do to advance their cause (again, remember, I am a Pennsylvania Liberal like Bob Casey and, for that matter, Arlen Specter.)
I read that when Aeschylus produced "Agamemnon," and Agamemnon's wife murdered him in the play with a sword, Clytemnestra (his wife) placed her foot on her husband's dead body and said, "I stand by my deed!" and audiences gasped.
Anita Hill said today, "I stand by my testimony."
GASP!

Ya know, Cyteria, weirdly, I don't give a damn how Thomas treats women, short of assault, but what I really do care about is stuff like him helping brainwash Americans to accept fascistic tactics.

Brad, How about doing a limbaugh thread. I think his world is about to rock. . .

Well, and dig the damn huge advance Murdoch paid him for his book.

Normally I may have complained about your edit for political correctness.

But, I have finally reached the point that I just don't give A shit.

I am so sick of it all the scroteless dems and their shit leadership pelosi reid hoeya etc....

I hope my nonvote in "08" will count or if the dems really piss me off I'll vote against them just for spite.

These fucking arogant entitled pricks actually think they won ... no the gop lost and they are still losers.

As long as impeachment is off the table so is my vote.

I just got done linking to a Guns and Butter show about the anthrax attacks and the proliferation of germ warfare research, and John Podesta (for the DNC) taking impeachment off the table in 2003 and 2006.... It's an hour of hair-raising stuff.

And, unless we manage to come up with a good candidate, and there isn't one running now. I think I'm with you on the vote thing....

Hill is nothing more than a disgruntle former employee whose boss failed to response to her come-ons. She was crestfallen when he brushed her aside and married a woman that was his equal.

Anita Hill is a walking and talking example of a scorned woman!

I still don't know who was telling the truth in 1991, but after reading Professor Hill's op-ed I find myself leaning toward the Justice and away from the Professor.