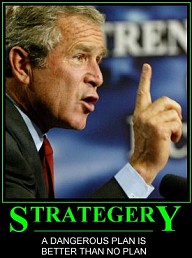 George W. Bush, the man who once invented an entire combat history with his quote "I've been to war" in 2002 has now completed into his move into an alternate reality with his decisive mentioning of the Soviet Dinar For those who don't know the dinar is Iraqi currency, not Soviet. That currency is the rouble.

How many times can he say something stupid before people realize, he's not just "bad with words"?

« PREVIOUS STORY "On the Road with George W."
» Go to The BRAD BLOG front page «
"The Lies of the Swift Boat Vets" NEXT STORY »

dud eits even weirder. There hasn't been a Soviet Ruble for more than a decade. After the fall of the USSR, the Russians replaced the Soviet Ruble with a Federation Ruble in July of 1993.

So what? Jaime misspelled ruble too. You guys are like children!

It's gross how much this guy has brain washed people (GWB).

FYI - for anyone who hasn't read Dude , Where's my country..? I highly recommend it...He brings up some great points.

But the side effects are frustration due to the fact that he's right. And it sucks.

Perhaps Johanna, you are brainwashed! You do not live in this country so give it a break. Your country is fortunate to be sitting on top of the US. No one will mess with you. You should be thankful as all get out!

Hey did you know Paul is the first name of our Prime Minister?

Funny guy, my prime minister. I voted for him, but every day I read about things he's done or said that I don't support. I guess that makes me less than patriotic huh? Maybe. But in reality, it means i have a mind of my own.

Something else- I'm not going to give it a break because I care. I care about innocent people dying because people like you voted for a shmuck who thinks he's better than the rest of the world. And until you wake up and realize that it's OKAY to question your leader and its OKAY to think for yourself, I won't give it a break. So get used to it.

Presidents are supposed to know shit like this. Bush's stunning acts of anti-intellectualism get us into mess's like say...Iraq.

And how child like is this whole "French Looking" thing, too. Pot, Kettle Black.

PS. Thanks for adding my slug there Brad. Forgot to do that when I post.

let's be clear on a couple of things. Rouble is one of the accepted translations for the official currency of the Russian Federation. On the other hand Bush makes a reference to the Soviets who havent existed for over a decade. That, as is your defense of Bush, is beyond pathetic.

« PREVIOUS STORY "On the Road with George W."
» Go to The BRAD BLOG front page «
"The Lies of the Swift Boat Vets" NEXT STORY »
See MSVL and support BRAD BLOG! Click here for signed premium version!