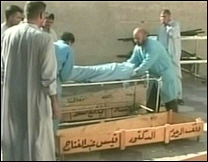 In Iraq, the month of May saw the largest number of Iraqi civilian deaths since the war began 3 years ago. The Baghdad morgue reported over 1400 dead in May. Over 400 of the dead Iraqis could not be identified. Some journalists, like veteran reporter Robert Fisk, claim that the officials are under-reporting the actual number of deaths. In addition, many more bodies can never be counted because explosions and road side bombs often leave little evidence of human remains.

What's clear is that the violence in Iraq is increasing at a pivotal time for the fledgling Iraqi government. Even the shell-shocked Iraqis are stunned by the new level of violence. For example, over a two day period, 18 severed heads wrapped in plastic have been discovered. The likely cause are the escalating sectarian revenge killings.

In this video, an Iraqi woman cries,


Where is the government?

Where is Bush who occupied our country?

Why did they kill us?

ADDENDUM FROM BRAD: Good timing for David Edward's post here. I was about to do one of my own, pointing out this report that 6,000 Iraqi corpses have been discovered in the last 5 months. Given Iraq's population of appx. 25 million, compared with the US's population of 300 million. The equivalent of 6000 deaths in Iraq over the past five months would be some 72,000 in America. If we had 72,000 murders via "sectarian violence" in America in just five months, would that be considered a civil war? Or would we criticize the media for not reporting all the "good news" in our country?

They did it to stop islamofascism ... cause they want a monopoly on fascism ...

Where's Paul, Ricky and Mike J to tell us how much better they have it now?

Brad said: "Or would we criticize the media for not reporting all the "good news" in our country?"

We wouldn't have to criticize them, since they'd be dutifully reporting on the success of American Idol, who got kicked off the island, celebrity babies, some missing person in a foreign land and home run hitters. Oh and of course everything said by some smarmy he-she or whatever it is.

Brad,
You hit the perspective nail square on it's head.

That is the message that we all need to be saying.

Thank you for making it crystal clear.

Just give * a little more time, and we will be Sunni and Shia here, start seeing that death toll right here in "The Land of the Free and the Home of the Brave".... Do you suppose our country has always been this awful and we just didn't know it until a medium finally arrived upon which we might learn the truth? Or are those goofy chemtrails pumping us full of some sort of psychosis-inducing gas?

Well, I don't think "our country has always been this awful" so it must be that "psychosis-inducing gas".

Don't know whether to breath deep or get a gas mask!

Brad, I beg to differ witcha on this one, but consider:
How many handgun deaths do we have in the USA each year? Murders, suicides, mistakes - whatever - we have a continuing handgun-fueled massacre of our American population every year. I don't know the latest numbers, but it's in the tens of thousands, I'm sure. We, in fact, have waaaay more deaths due to handguns than in all the other first world countries combined. What's the difference between us and them? They have serious handgun control laws. We don't. We have bazillions of guns.
Now, lately I've been hearing some of the election reform folks saying we need guns to fight the bad guys. All I gotta say is "quit dreaming!"
We would be woefully outgunned. What we need is the weight of public opion. Follow the teachings of Gandhi and MLKing. Rightious non-violence will work.
And no, I don't wanna get in any debate with gun fans; we can save that for when we have free elections again, OK?

It may start to increase again as soldiers return from war and blend into the culture again.

We are the most violent society, and the argument could be made that what we are really exporting to Iraq is violence, not liberty.

An officer has refused to go to Iraq, saying the war is illegal (link here).

Speaking of gas. Did anybody see the virtue czar on The Daily Show.

Why do they always introduce him as Reagan's Education Secretary without ever mentioning his years turning America into a prison.

They edited the segment heavily and quickly went to an ad when some questions got uncomfortable. I haven't seen them do that before.

It is being reported that Zarqawi was killed in Iraq.

If he was a terrorist and killed others then he is reaping what he had sown.

At any rate it will appear whether or not the regime had him pegged correctly ... if he was a big deal then it should effect the occupation ... in the sense things should now get better, noticably, with him now gone.

But that did not happen when Sadaam and his government were removed.

Hurray! Better late than never. Is the war over now?

But NBC News has learned that long before the war the Bush administration had several chances to wipe out his terrorist operation and perhaps kill Zarqawi himself — but never pulled the trigger.

In June 2002, U.S. officials say intelligence had revealed that Zarqawi and members of al-Qaida had set up a weapons lab at Kirma, in northern Iraq, producing deadly ricin and cyanide.

The Pentagon quickly drafted plans to attack the camp with cruise missiles and airstrikes and sent it to the White House, where, according to U.S. government sources, the plan was debated to death in the National Security Council.

“Here we had targets, we had opportunities, we had a country willing to support casualties, or risk casualties after 9/11 and we still didn’t do it,” said Michael O’Hanlon, military analyst with the Brookings Institution.

Four months later, intelligence showed Zarqawi was planning to use ricin in terrorist attacks in Europe.

The Pentagon drew up a second strike plan, and the White House again killed it. By then the administration had set its course for war with Iraq.

“People were more obsessed with developing the coalition to overthrow Saddam than to execute the president’s policy of preemption against terrorists,” according to terrorism expert and former National Security Council member Roger Cressey.

In January 2003, the threat turned real. Police in London arrested six terror suspects and discovered a ricin lab connected to the camp in Iraq.

The Pentagon drew up still another attack plan, and for the third time, the National Security Council killed it.

Military officials insist their case for attacking Zarqawi’s operation was airtight, but the administration feared destroying the terrorist camp in Iraq could undercut its case for war against Saddam.

The United States did attack the camp at Kirma at the beginning of the war, but it was too late — Zarqawi and many of his followers were gone. “Here’s a case where they waited, they waited too long and now we’re suffering as a result inside Iraq,” Cressey added.

And despite the Bush administration’s tough talk about hitting the terrorists before they strike, Zarqawi’s killing streak continues today.

while this was being posted, President Bush was killing Zarqawi. How Ironic. You guys can never get anything right.