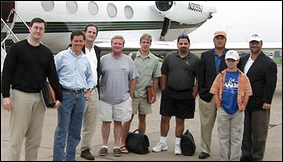 Earlier this week, during the trial of David Safavian, photos were released from one of the Abramoff-sponsored golf trips to Scotland. David Safavian is charged with lying to investigators about his relationship with Jack Abramoff.

The photos show Abramoff with some of his "Champions", a term he used to describe people in government who could provide information and assistance to Abramoff's clients. Champions were showered with gifts and trips like the golf trip seen in the released photos.

In the group photo above, Abramoff's Champions are shown prior to boarding the Gulf Stream jet. Neil Volz, pictured on the far left, was chief of staff to Bob Ney. He is considered a star witness for the prosecution. Standing next to Volz is Ralph Reed, the former head of the Christian Coalition. Congressman Bob Ney is 4th from the left. He is the short guy wearing the grey shirt. Jack Abramoff is on the far right.

This video is from MSNBC's Countdown. David Shuster explains the story behind the photos and the lengths to which Abramoff would go to provide favors for his Champions. Shuster also has an update on the status of the Safavian trial.

See ... there are just as many dems in the photo as there are repubs ... correct?

Where are all the records of Ken Lay and Jack Abramoff's visits to the White House?

Gee wish the corruption had been exposed.

Gee wish the people were not so stupid

Gee wish the damage was not so great

Gee wish that justice was coming

One day there will be justice but it will be fair and all ... even the hairs on their heads ....will be known. Yes justice is coming and so is their judgement. To face their book of life, all will see the day.
So do not be sad... do not worry.... these men who steal from us all... will have a very heavy price to pay in the end.

A very heavy price.. will be paid by all.

how can one not chill and shiver with pride ?

They should make a video golf game out of this. "Abramoff Golf Junket", pick your favorite Republican criminals, like you pick NFL players on video games.

"MY FOURSOME IS: DELAY, NEY, THE GUY WHO STAGES FAKE DEMONSTRATIONS, AND ABRAMOFF. BLACKWELL IS MY SUB. HE'S THE ONLY BLACK GOLFER THEY'LL LET IN THE FOURSOME."

I'm sure they don't count their strokes properly, either. Probably, these guys bring pencils with erasers, when they golf.

Having heard the weird stuff these GOP pervs are into, I am curious...who the hell is the kid?!

But Ralph Reed is such a nice looking young man.

Don't you people get it. It doesn't matter if these guys make backroom deals, (or backGREEN deals in this case) It's all in God's plan.

Every thing you plan or do benefits you or people in your party. The rest trickles down, (don't forget to shake it before zipping up). It's a WONDERFUL world!

Abramoff looks like a damn gorilla.
Those kids in the picture will have to live down being known as the sons of low life criminals.

The kid is W ... aka preznit blush

Wishing for another person's death? Then you talk about judgment in the end times & the Book of Life?

That's a major contradiction. I don't think you will be in the book, but that's not my decision.