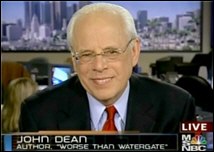 As Nixon's White House Council during Watergate, Dean testified before the Senate committee that eventually lead to Nixon's resignation. John Dean has compared President Bush to Nixon and says that Bush's warrantless wiretapping program is illegal.

The Friday hearing will be held by Chairman of the Judiciary Committee Arlen Specter's who strongly opposes the censure resolution. Specter withheld the names of other witness scheduled to testify.

In this interview, Dean says:

The Senator's Censure Resolution raises issues that I think need to be addressed. If some of the other legislation on the National Security wiretaps do not pass then something like [censure] is necessary or the Senate and Congress are going to waive any right to complain about [the illegal wiretapping].

... if the Congress doesn't stand up and say something about what the Presidents is doing --- in essence we have, down in 1600 Pennsylvania Avenue, lawyers who are taking the most aggressive reading of any part of the law that they can to enhance execute power. And I think it's past time for Congress really to stand up and do something about it.

John Dean also comments on the White House Chief of Staff change and how Jack Abramoff is a threat to the Bush Administration.

David, as you know I have posted many links to articles by John Dean here on this blog over the years.

The reason is that he knows what goes on behind the scenes, having been a White House Counsel to the President in years past.

He has been beating the drums and informing us about the grave danger this regime presents.

For those who would like to read his articles, I am providing this link.

Who would recognize this problem better than John Dean. I keep watching for Bush to develop Nixon's 'buzzard's hump'.

It is great that Dean will testify. I remember watching him testify during the Watergate hearings. He is eminently credible.

o.t. , but some good news for a change: Jill Carroll, the reporter who had been kidnapped in Iraq, was freed today....

IT IS SOMETHING EVERYONE EVERYWHERE

DOES IN THE SAME LEGAL JARGON

"Bush does not have to worry about Censure," says Antonin Scalia, "don't you lefties remember Bush v Gore? And don't you remember that I am Bush's favorite Justice?".

Congress isn't going to stand up to anything.

Surely you don't believe this is all an accident, do you?

The Republican Congress is not going to do anything, that's true.

The Dems, in any fair election, would retake both the Senate and House this year. That is why they won't put their heads on the block for a censure motion, and that logic is sound.

• The whole value of a censure motion is lost if people use it to bash the Democrats (instead of using it to bash Bush).

Write the DMC and let them know they won't get a vote till you see there name signed to censer Bush, they need to be threatened by the people. If there not affraid of us then we lose. It doesn't matter, there going to lose anyway. They need to do the work now! before there voted out by the machines

Senate Hearing on Censure of Bush

To hold hearings
to examine the call to censure
the President.

Steve's right. Hold their feet to the fire NOW re support of the censure. After the election we won't get anything out of them, not that we're getting much now.
They like to claim they're waiting for the outcome of the so-called "investigation" of the wiretapping to support censure. The problem with that excuse is that Bush's Administration is refusing to give up the documents needed. So that "investigation" will go nowhere.
That's why they're 'awaiting the outcome'.
Get out your cattle-prods everybody & start giggin.