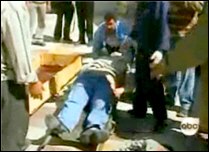 Responding to the President's criticism of the media coverage of Iraq, ABC's Nightline, airs the story of an attempt to report on good news in Iraq.

After a day of covering the horrible violence in Iraq, ABC reporter Jake Tapper tried to find some lighter news. The ABC News team decided to cover a new Iraqi sitcom and the challenges of creating comedy for Iraqi television viewers.

The story quickly turned from good news to tragedy and fear as Jake's contact, who was also the head of the entertainment division for Iraqi TV, was murdered during filming.

Jake Tapper concludes the story with these words: "And there went our effort to show comedians trying to make Iraqis smile again. It ended with the funeral of the man who helped us put the story together. A horrible, gruesome, perfect metaphor for daily life in Iraq."

Well then, why not show a documentary about the re-building of Fallujah?

It could have an international cast, including Iraqis who fled the city and American soldiers who destroyed the town looking for "insurgents." We could call it "The Longest Day: Part II."

So much for good news. But the 'liberal' media planted this story! Yeah, right. All you rightwingers out there that think the media just reports on bad news from Iraq, understand, THAT'S ALL THERE IS, FOLKS!

So, ABC's idea of the "lighter side" of Iraq news, is one of their guys getting murdered??? I wonder what the darker side is, then...real "light-hearted" television.

Sounds like the pilot for a real rollicking Iraqi comedy show...

The republican talking points always shift the story so as to blame someone else for the republicans own wrongdoing.

It is the spoiled brat syndrome.

I think it may have been advantageous, in the end, when Bush blamed the media for all the bad news coming out of Iraq.
Here's why--
The reporters say more media have died, been injured & kidnapped in Iraq than in any other war.
It had to personally burn like fire when Pres. Boob had the nerve to claim things are progressing well & it's THEIR fault people don't know about it!
Similar to the way media became outraged at what they saw going on during their coverage of Katrina--maybe this will inspire them to delve into ALL they can GET on Iraq.
One can hope.
There is SOOOOO much bad they haven't covered--like billions spent in state-of-the-art permanent military bases, like exactly how many billions Halliburton & the rest of Cheney's home boys have stolen & all the various ways they've done it, like the way contractors feed our troops out-dated foods & overcharge us & waste truck loads of refrigerated food because they run out of gas while waiting to be unloaded & it spoils, or pad their bills just to make even 'mo $ --like the way they just abandon expensive new vehicles rather than repair them for lack of the part needed-so the companies can send us a new one & get more money, or because they ran out of gas rather than let the drivers have fuel with them to refill, (this has all been testified to in Congress by guys & gals back from Iraq & is on record, unless Bush declared it classified already so no one can see it) --or like the high suicide rate of our troops, or like illness caused from depleted uranium all over the place, like the way Bush has cut benefits for the military, not gotten proper protective equipment for soldiers & for the vehicles they ride in, etc. etc.
See how much your President appreciates you risking your ass every day reporters?
Go get that story, boys!

LMFAO.. pRicky!! please! you're killing me!

What, they arranged to have a TV producer killed so they could show "biased" news?

what a fuckwit you are.

Iraqis don't want us there. Shrubby says "we're staying".. and then wonders why there's "so much bad being shown on TV"? What GOOD is there? rebuilding schools we've destroyed? Putting back the hospitals we destroyed? The -fact- is, Iraq is in WORSE OFF SHAPE than when we went in. Sure, Saddam is gone, but the people are suffering MORE for the time being, and will CONTINUE to suffer as long as we're there.

pRicky.. explain to me how after almost 4 months their elected government FINALLY met, and then for only 30 minutes? How is that "mission accomplished"? Why aren't their ELECTED LEADERS doing a damn thing over there?

Oh.. right.. you thought you could have an "America like" Democracy in a 3rd world Arab nation.. dipshit.

If you take any child and drill into his head that aliens rule the universe and if he blows himself up killing anyone that disagrees with him he will go to a wonderful place you can not expect to change his way of thinking when he is an adult.
The shia think they have to kill suni and the suni think they have to kill shia. What makes the fundies think they will ever get along with christians if they can't even get along with muslims.
I am sorry but it is a dumb scenario, but that is what has been taught in the mideast for centuries and no amount of evangelism is going to change that.
The fundies might just as well pick up their toys and go home. So far as the Muslims are concerned the only good person of any other faith is a dead one.
This is not a racist or religinut statement it is just a fact of life.
The only peaceful solution is to abandon the whole area and sink any tanker trying to export oil anywhere and destroy all pipelines. Let them keep their oil and see how well it goes between two slices of bread.

The sheer brutal, xenophobic idiocy of #10 leaves me breathless. Iraq was a SECULAR country before we turned our military eggbeater loose in it!

And I think that the irony of ABC's project and its outcome have been lost in translation.

What a way to end a Friday, with the funniest sentence ever: "ABC is biased...go to Drudge Report to see proof"!!!

I am still laughing, as I signoff for the weekend!!!

Well I do agree that Islam is different than all the other religions.
Their "missionaries" spread the faith by killing anyone that won't convert & killing anyone that wants to "fall away".
I first learned that in the late sixties when we studied all religions in high school---before the terrorism.
It also is not just "spiritual"--Islam functions as their "government" too. The clerics take their money & decide how it will be spent, along with telling them what to do & making them perform all these rituals day in & day out. They better do it too, or there are consequences.
I didn't respect it as a religion even back then because its more to do with power & control than anything else.
I'm not what you'd call prejudiced against them, it's more that I feel sorry for them being stuck with it, like it or not.

come on people, freedom is on the march