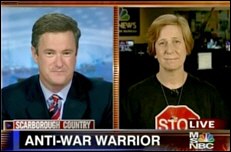 Cindy Sheehan is joining other peace activists today who are undertaking a 140 mile march to protest the Iraq war and demanding that Iraq war monies be diverted to Hurricane Katrina relief.

CNN reports on the peace/anti-war activists who are marching 140 miles to New Orleans.

The video in this report is from yesterday's segment of the march.

One protester carried a sign saying "Make Levees Not War!"

At least Joe Scarborough showed respect to the mother of a fallen American soldier. That is much more than I can say for most rightwingers.

...and thanks for having her on, and not pretending that she does not exist.

Yeah Dan, hes been acting real nice lately, what is going on ? must be the poll numbers
I'm thinking now that they don't report the story that's important, they report the stories that are important to the bottom line (polls=advertising bucks)
What else is old ?
I so much appreciate Cindy sticking with the fight, it would have to be real tough after losing one of your kids
in this mess
If it was my kid, I don't know if I would be out there with a candle or a machine gun

Thanks for this posting.

Do you think that this could be a sign of an impending "tipping point" (the first such one since 1993) from the MSM?

In 1993, the MSM caught wind that the public hated President Clinton's "Don't Ask, Don't Tell" policy and started "tipping" to the political right.

Some say that allowed the 1994 Republican Revolution to have its media outlet, in turn causing a power spiral into the neo-cons' hands.

I hope we see more of this, especially with the mid-term elections and the Democrats' "Better Way" Contract looming on the horizon.

Bush and Cheney are happy campers today. They and the interest of the oil company elite are celebrating. Not for St. Patrick's Day No.. The could never pass drilling in the Arctic Wildlife Refuge so the Republican majority added a provision to drill there on the budget so Dem couldn't fillabuster. It still has to pass the Republidem controlled House. Maybe Dick and Dubya will go down to the ranch, get drunk and shoot each other this time.

Inspiring interview. Thanks for the link.

We R With U In Spirit

Get Your BROOM ON -

U and Your BROOM R Very Welcome Join In

Thanks, EveryOne 4 Your Works

Man, it was NICE to see that guy behaving himself for a change. THANK YOU for turning me on to it. Now I can hope there's room in his head to accept that our invasions of other countries have been wrong.

Thanks Cindy - we love you!

Speaking of levees - the Boobengrabber took Chertof
on a helicopter tour of our levees this morning. I haven't had a chance to hear any news reports on it, but yesterday Christine Craft - on one of our local progressive radio stations - was asking everyone who lives along the levees to put Impeach Bush signs out on there roofs for them to see.

I am rather concerned right now since much building has been going on in the flood plains since the levees were supposedly good for more than a 100 year flood. Now they have been decertified and most likely aren't even good for a 100 year flood.

The last 2 1/2 weeks have been record cold here with over 3 feet of snow accumulation in areas of the foothills which normaly see only a few inches for the whole winter. Plus 10 - 15 feet added to the mountain snow pack. The weather is beginning to warm now and should a warm storm - aka Pinapple Express - come in the Sacramento area could easily make New Orleans look look a puddle!

It was just such a storm that hit in the late '90's and the levees were within 4" of overtopping. There was not the low elevation snow pack at that time.

See, Ricky? We give a Republican his due when deserved! We don't put party before country.

Alan Colmes, Hannity & Colmes, Fox News, April 25, 2003:
"Now that the war in Iraq is all but over, should the people in Hollywood who opposed the president admit they were wrong?"

"Earlier today, the Pentagon launched the biggest air attack in Iraq since 2003. The White House said the attack will continue until President Bush's approval rating goes above 40%." --Jay Leno

"We're coming up to the third anniversary of the invasion of Iraq. I'm not sure how Bush is going to mark the occasion. I think we can rule out landing on an aircraft carrier and declaring mission accomplished." --Jay Leno