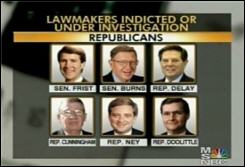 This report from David Schuster of MSNBC's Hardball provides a review of the corruption investigations heating up in Washington D.C.  Schuster concludes:


Just as this town moves into an election year, the Bush Administration's own Justice Department prosecutors are seeing reasons to move the CIA leak case and other investigations into high gear.

Guess I need Media player update - starts to play without video, then I get choppy video, then at about 45 seconds I lose the sound.

Winamp wouldn't work at all - downloading their latest update now - will see.

Anyway the screen shot shows Doolittle which is great!

Guess I need Media player update - starts to play without video, then I get choppy video, then at about 45 seconds I lose the sound.

Winamp wouldn't work at all - downloading their latest update now - will see.

Anyway the screen shot shows Doolittle which is great!

Sorry 'bout that double post - upload hung for a long time and then reverted to the page where I had made my comment. Hit submit again and got it twice.

How about this Most Wanted Poster of the Banana Republicans?

I suggest a "Bush/Cheney 04" poster as a special prize for anyone implicated in more than one scandal.

Those with only one scandal against their name will be offered jobs in James Dobson's offshore ministry
in the Cayman Islands, beginning in 2009.

Comment #6: Under George Bushit you left out lies about going to war (pre-emptive jerkoff). In the should be a crime catagory: Changing the rules of forestry to promote -0- accountability for destruction of public wildlands. Reversing the law that previously protected 58 million acres of public wildlands and legalizing offroad vehicles on these lands. Full blown plans to delist the Grizzly Bear in 90 days based on the one sided story that the growth of the isolated population now suffering from inbreeding at Yellowstone Park is cause for their removal. I really can play guitar and I want to smash his acoustic guitar on his head. Suppose he could write a song about being a lying murderer and stealing elections to claim victory. Haliburton (Killing) Fields Forever.

Here's a scenerio: Bush has obviously got to go. He's a liability to the Neo-cons. They certainly can't risk having him testify in any of the scandal cases that are being exposed. (He doesn't lie as well as the rest of them). They get the CIA to take him out. Cheney declares martial law. Somehow the blame gets laid on Chevaz so the U.S. can attack Venezuela. This takes care of five problems: it stops the threat of this growing people's democracy; it stops its leader, it stops dissent against the FTAA, the U.S. gets its hands on their oil, and other South American countries are intimidated to fall in line. Think of the logic of this scenerio. Think like a neo-con. Spread the word before it really happens.

It's almost plausible, Linda. I say "almost" because Cheney is a control freak who doesn't trust the C.I.A. That's why he and Rumsfeld set up their own intelligence operation (which might be why the C.I.A. complained about Valerie Plame being outed; they don't like being pushed off their turf).

The "talk around Washington" (occasionally reliable) is that Bush is fed up with Cheney. But what is he to do about it? Bush doesn't have the brains or the savvy to lead the country, and the good people have all left his administration.

It's sort of like Howdy Doody discovering that Buffalo Bob is a demented crook. It's Howdy's show; he push Buffalo Bob aside if he wants, but he's still only a puppet himself, so who will lead the peanut gallery? Clarabell the clown?

It is a natural progression: neoCons morphing into neoConvicts ...

The underlying mental construct in the neoCon is a false understanding of what America is about.

They think it is about a form of religious capitalism that must be based on military power.

The oil is taken under the guise of spreading freedom (and Diebold voting machines) everywhere these religious capitalists think it needs to go. Follow the oil and the Diebold machines.

Since this is not an american form of capitalism, but is instead "God Inspired Amerikan Kapitalism", they need to lie, cover up, and fool the body politic.

Eventually they become so abusive, brazen, and criminal in their thinking, that the stench and vileness of their practices (torture, pre-emptive war mongering, money laundering, etc.) screams out to the US and also to countries abroad.

The polls indicate clearly that America has their number and their name.

Prosecuting them helps some, but still America must clean up its image and name for decades after a neoCon to neoConvict binge.