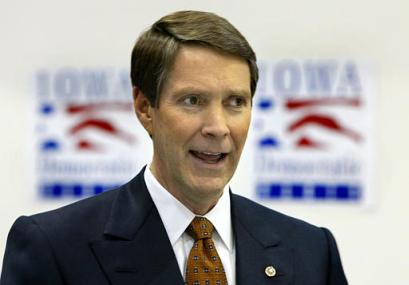 Congratulations, Senator Frist...You're an A-1 jack-ass!

READER COMMENTS ON
"RIGHT-WING PANDERER OF THE MOMENT"
(25 Responses so far...)

Here's an excerpt from the Newsday article


"I think today a pluralistic society should have access to a broad range of fact, of science, including faith," Frist said.

I imagine, given his notion of what a pluralistic society should have access to, he'd also support the teaching of communism, socialism, pacifism, anarchy and many other inconvenient political philosophies ...

After all, a pluralistic society should have access to a broad range of facts, should it not, Senator?

He's trying to win back the RW xians with this ploy - he was invited to NOT appear at their "Just US Sunday II" thing a week or two ago... because of his stance on stem-cells... more pandering to the fanatics for his 2008 run for pres.

In regards to the subject of this thread, I have been stewing over a letter I received yesterday from the "(dis-)honorable jackass". I wrote to him about the Downing Street Memo, and this is the crap he sent me. What it shows, more importantly, is that these morons are pulling at whatever straw they can find, no matter how incidental, to justify themselves. I took the time to copy this letter because I felt that perhaps it shows a much more dangerous trend regarding the information we are about the see in the near future regarding "pre-war intelligence," to quote him, and wondered if this might be a red flag, a new justification story.

I am riled, I am furious, and I am almost sorry I moved to the very "red" state of Tennessee represented by such a conniving, deceitful, (add any other expletives you like at this point) and potential presidential candidate, no less!

I don't know - is it only me who feels that this excuse is a potential problem by way of others banding around him and also trying to pull the wool over the eyes of the American people? What would HE say to Cindy Sheehan regarding the reason her son had to die?

Here's the letter. If anyone feels that it should be forwarded to anybody with more clout to either address it or begin to form OUR answer to this, please feel free to do so. Maybe I'm just over-reacting.

"Thank you for contacting me regarding pre-war intelligence on Iraq. In Iraq, America confronted a brutal dictator that invaded two countries, sponsored terrorists by bankrolling suicide bombers, and made a mockery of the United Nations' Security Council resolutions ordering him to fully disclose all weapons and weapons programs.

"In May 2003, the Iraq Survey Group, consisting of 1500 military and civilian experts from a number of countries and led by Charles Duelfer, was formed to search for evidence of weapons programs in Iraq. In its September 2004 report, the Iraq Survey Groupl made some disturbing findings. The Duelfer report concluded that while pre-war U.S. assessments of Iraqi capabilities were flawed, the analysis regarding Saddam's intentions to produce or acquire those weapons were correct. Specifically, a key finding of the Duelfer Report concluded that Saddam "wanted to end sanctions while preserving the capability to reconstitute his weapons of mass destruction (WMD) when sanctions were lifted." The Duelfer report also concluded that 'Saddam aspired to a nuclear capability - in an incremental fashion, irrespective of international pressuer and the resulting economic risks," and that he intended to focus on his efforts on ballistic and tactical chemical warfare capabilities.

"Because of concerns about the effectiveness of our intelligence operations, last year Congress passed and the president signed the most sweeping reform of the intelligence community in more than fifty years. This law reorganizes the nation's intelligence structure to provide the strength and agility to respond to international terrorism, rogue states, the proliferation of WMD, and other challenges of the 21st century. I strongly supported this legislation, whic incorporates the key recommendations of the 9/11 Commission, and I will continue to work with my colleagues in the Senate to ensure that America is ready to meet the challenges of the war on terror.

"Today, there are Iraqi leaders, Iraqi soldiers, and Iraqi policemen working to take their country back from terrorists and establish a free Iraq. We must keep true to our principles, have faith in our Armed Forces, and know that history, in the end, will be on our side."

"The Duelfer report concluded that while pre-war U.S. assessments of Iraqi capabilities were flawed, the analysis regarding Saddam's intentions to produce or acquire those weapons were correct."

Iran, North Korea, Jordan, Libya, Cuba etc. all have intentions. We didn't invade because of intentions.

Next time you write the jack-ass, please direct him to http://www.venganza.org/ and implore him that we teach the theory of the Flying Spaghetti Monster in church and in our schools.

Frist is pandering to the "Christian right-wingers". Oops, I see you already used "panderer"... but there are no better words for this: panderer, pander, pandering. Don't forget that Frist wants to be our next "President".

Bush is not only ignorant about science, he willfully twists/ ignores/ has a bad trip etc. on scientific information, including climate change, etc. etc. Just hoping that he gets sucked into a black hole sometime soon.

More info about the facts at:

UCS is an independent nonprofit alliance of more than 100,000 concerned citizens and scientists. We augment rigorous scientific analysis with innovative thinking and committed citizen advocacy to build a cleaner, healthier environment and a safer world.

That's the "thought-crime" mentality sneaking out and hoping it isn't recognized for what it is. Saddam "wanted to" develop weapons of mass destruction; ergo he was guilty of wish. Frist is praying everyone else is as stupid as the people who voted for him.

Well, I am guilty of "wanting to" wring the neck of every RW neo-con thug in Washington. I guess they'd better invade my backyard and run me in...

I'm a UCS member too and sign every petition. Thanks for linking; everyone should join.

This is unbelievable. One good thing about it is that Frist has queered himself with the religious right and with the rest of the population. Now see very little chance of him being a viable presidential contender. He blundered when he acted like a scientist with the stem cell thing. He must have been under some heavy pressure to do something this stupid.

Ilene-I’ve lived in the red state for a very long time. You may have a protracted adjustment period ahead.

GOT THE SAME LETTER IN THE MAIL YESTERDAY! HE SENDS THEM OUT TO EVERYONE I GUESS. HE DID,ENT EVEN READ OUR LETTERS ... IT WOULD BE TO MUCH WORK!!!!!!!!!!!!!! MOVING BACK TO PENNSYLVANIA REAL SOON!!! I MISS MY BLUE STATE. PLEASE DONT VOTE FOR HIM?????????? BE REAL CAREFUL, STUDY THEM REAL HEARD... I HEAR BUSH WANTS TO CHANGE THE 14TH AMENDENT,WHERE HE CAN BE OUR A-HOLE PRES. FOREVER.

Seriously, is there something pyhsically wrong with frist? He looks like he weighs about 80 lbs. in that pic.
Did anyone catch the maddening idiocy from Phylis Schlafly---alright, how do you spell it?---on Bill Maher last night??

Anybody tries to foist "intelligent design" on you, ask them why human beings grow wisdom teeth, even though there usually isn't room for them in the human jaw.

Make them explain that human beings have evolved since caveman days.

I wrote him a letter explaining that as a man of science he has to know the difference between a scientific theory and one that does not meet the criteria of the scientific method. I told him I expected him to make this clear to the American people as soon as possible. I got back from him a form letter response that he was looking forward to reviewing my email. We'll see.....

Big Dan #10 - And whatever happened to Bush?!? Was God having a bad day?!? Whatever makes them think God will be putting up with them in "heaven" for "eternity"?!? Punishment for God for having created them?!?

My first thought is "great let him go out on this limb and make himself unelectable" But, as we all know, unless there are some drastic changes, the elections in this country can be stolen so that these religious morons keep getting elected. It may be boring work but the only chance to save things is to get back Dem. control of congress in 2006, then we can get some floor time for the election reforms we desperately need by 2008. But of course the elections must be watched very, very closely.

Ok, I just watched the tape of Phyllis Schlafly from last night's Real Time. Here's why this was maddening:

Bill to Phyllis, talking about conservatism:
"...the country has turned toward your way of thinking..."
Oh really, Bill? In my humble opinion this is one
little example of how intelligent people like Maher buy into & casually repeat the right's talking points as if they were true.

One little example comes to mind: the right's claim that a majority of people in '04 voted based on morality, when it was actually a bit over 20%, but how many times did you hear that claim repeated?

Phyllis:
"...conservatism is the popular way to go";
"...we have made conservatism mainstream in our country"

No, you haven't, Phyllis!

The fact that we hear conservatives endlessly repeating such things as "this country was founded on Christian principles", "Christianity is under attack", "our criminal code is based on the ten commandments", and "Bush won fair & square" does not make these things true. Lies are lies no matter how many times you say them, Phyllis!!

I have right here beside me an EXACT DUPLICATE of that letter that arrived in the mail today - and I would be willing to bet that every single person in Tennessee who wrote Frist's office about the Downing Street Minutes got one!

And here I was feeling so special *L*

I'd also like to add that it's THE VERY FIRST response I have ever received from Bill Frist.

Lincoln Davis's office, however, has answered every single one of my emails (except of course the ones where I thanked him for his vote on particular issues)

Nothing like campaigning for re-election to spark a fire under our less-than-noble members of Congress!

Haha! Y'all are funny.

LOL. Does Frist look like Howdy or does Howdy look Fristian?

Which one is the oldest?