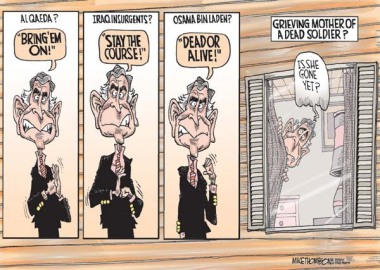 READER COMMENTS ON
"Toon of the Moment"
(20 Responses so far...)

But if he talked with one person about his accountability he might have to answer for his flip flopping about Rove, about the Downing Street Memo and it goes on and on. It would open a nest of worms. Oh that would be this administration.

Cute toon. Shows this guy is all hat and no cattle for sure. But scary too, because he really doesn't have to talk to her, just listen... and he wont do it!

Well, mean ol' Cindy might ask some "hard" questions and she wouldn't make it easy for duhbya to "catapult the propaganda."

I hope somebody will read this. There is a petition started on Michael Moores website...it has collected 14,559 signatures to Bush regarding Cindy.

No matter how your opinions run on different websites this would be important to let Bush and the reading world know about Cindy and all the sons and daughters still in Iraq.

Sorry for not using the HTML

This is an election related post over at Roger Ailes, (the good one) that Brad may wish to keep for his files, if nothing else. He probably already knows, but it can't hurt.

Too Stupid to be President

Wonderful quote from Cindy---"Why do the right wing media so assiduously scrutinize the words of a grief filled mother and ignore the words of a lying president?"
You are so right, Cindy! We honor you & support you whole-heartedly!!

I've been reading some of the names & comments on the petition TexasLady mentioned in comment #4, most of which are supportive & heartfelt, and many of which come from vets or relatives of vets cheering her on.
And then there are the rightwing nutjobs. I am posting a few of these to illustrate the caliber of SOME (not all, I realize) of bush's loyal supporters. These people must be SO proud of themselves. This is the first one I noticed:

Ima Loon Moonbatia MA
"I know you met with her once, but she loved you then, now she changed her mind. Meet with her and call her a hypocrite to her face and tell her to stop disgracing the death of her son."

Nice. At least the author chose an accurate username!

There are quite a few that are just lame & stupid, like
the one from "Mickey Mouse", who posted the entire lyrics to the Mickey Mouse Club theme song, for some inane reason.

Some are a bit more venomous:

Then there's this fellow:

Frank Pierce Cumming GA
"I am very sorry for Cindy Sheehan's lost. Her son died defending his country. Sheehan has met with the president in 2004 after which she said "'I now know he's sincere about wanting freedom for the Iraqis. I know he's sorry and feels some pain for our loss. And I know he's a man of faith." She also talked about how her life briefly returned to normal: "That was the gift the president gave us, the gift of happiness, of being together." That is very different from what she is saying today. Could it be that someone spoke to her about changing her tune? It's time for her to come clean and tell the truth about her current position. She should tell the truth for her brave son."

My reply to Mr. Pierce:
Cindy has already addressed what some see as a change in attitude between then & now: she has said that at that time she was in deep grief & in shock. Look at the Keith Olberman video-interview, Mr. Pierce; it's not hard to find. She HAS "come clean". She IS telling the truth. And those are two demands, sir, that need to be directed at this president & this administration!!

Sorry for posting those offensive comments, but I thought they needed to be seen "in the light of day" so to speak. They are horribly, painfully inappropriate on a petition in support of the grieving mother of a fallen soldier.
It's one thing to disagree with someone, but these people should be ashamed.

There is only one reason why he won't have a meeting with Cindy: HE DOESN'T WANT TO LOOK STUPID ON TV! It would be embarassing for the liars to have the MSM show the world that Cindy is better informed and more articulate than he is. He needs a script or a black box. They don't care what might be said but its a no-win situation for the liars. They believe they will poll better if he ignores her.

Joan
bush the youger has no capacity for shame.

Might have gotten that from the elder bush, who failed to have his little branch get counseling in his youger years when it could have made a difference.

This is very off-topic & I apologize for that...but this is a site that details the 21 administration people 'allegedly' involved in the Plame leak:

#9,
Cole, you're so right. No shame at all.
I just read a piece on Buzzflash about the reason why it was ordered that pictures of soldiers' caskets be suppressed:
Seems there was some footage of bush laughing & joking with caskets being unloaded in the background. He does seem to have an unbelievable penchant for the inappropriate.

Re this cartoon & the comments on the petition...
many of the comments echo exactly the point of the cartoon: he is revealing himself as such a pitiful coward, so inept at even the smallest effort of diplomacy that it's almost painful!
So much time has gone by with Cindy waiting in the hot sun, giving interviews, amassing more & more supporters who come bringing food, flowers...
If he had met with her at the outset he might have salvaged some shreds of 'presidential dignity' (as if); but now?
I picture him, holed up at his comfy ranch, pacing, cursing, squirming, wrestling with himself in his tiny little mind: ""What should I dooo?? #@!*#! What should I dooo?!"
How can a grown man be so incapable of even this simple gesture of humanity?
Not only does he have no shame: he has no clue.

I'd feel sorry for the man if he were not such a heartless, soulless, conscienceless--as Randi would say--"lyin' sack-a-crap".

There's a piece on the Huffington Post that talks about the firing of General Kevin Byrnes, but it doesn't mention the rumors of him possibly having been sacked because he was trying to organize some anti-neocon activity within the military.
I read about this rumor more than once but cannot recall where...?
Gotta sleep.
Peace.

Thank you Joan for going to the website, hope everyone takes a look. Isn't it interesting that the stupid comments do not use a real name?

I have heard too, the comment that Cindy is being used but for what? To save more Caseys? Is that such a bad thing? Funny how the Terry Shievo case had big names running to the front but this cause that affects us all, has few loud voices.

Al Neuarth the founder of USA TODAY is speaking out, saying time to bring them home.
I e-mailed President Carter's foundation, he is behind groups working for Peace around the world how about starting here !

Take a moment and write to these people...and let them know to support our troops we need to stop the killing. Do something more than a $5.00 ribbon on the back of your car. It shocks me that some feel supporting the troops mean you leave them over there. It doesn't mean a son or daughter died for nothing to admit we were lied too. The honor is in saying NO MORE !

We are so much more educated and knowledgeable today than during Vietnam and that took 55,000 lives that we know of. We cannot allow that many to die again.

Does anyone have a link to sources on the true number of wounded and killed in Afganistan and Iraq? I am hearing that it is much more than the Pentagon released numbers but no factual back up yet.

HOW ABOUT ANOTHER WAY TO SHOW SUPPORT.

LET IT HELP PAY THE WATER BILL AND ELECTRICITY FOR THOSE WHO ARE THERE SUPPORTING CINDY WHEN WE CANNOT BE THERE.

SORRY TO TAKE SO MUCH SPACE WITH MY COMMENTS BUT TAKE A LOOK AT NEW YORK TIMES FRANK RICH COLUMN.

SOMEONE TELL BUSH THE WAR IS OVER

THINK ONE MOM DIDN'T HAVE SOMETHING TO DO WITH THIS? WOW !

Mr. President, can we talk about the war too?

Joan, have a good snooze

Like to say that my take of the broken brance is that he is a hollow core, devoid of emotion except that which is linked to his own sadistic narcisism. Everything is converted to his own pleasure, like offering a bogus plastic turkey table display to the troops in Iraq on a Thanksgiving quick visit --with a big smile and like his comment on leaving the
911 commission hearing--"I had a good time".

The wheels are falling off of this administration. Like the stockmarket the downside plunge is steep and rapid. Perhaps we will soon see the shrub curled up in the fetal position sobbing ala Jim Bakker style as the GOP goes into a meltdown mode.

Joan, #11- Go back to Huffington and look in the "comments" area. There's some good stuff there about Byrnes, the coup, etc.

Interesting to note that if you read the Downing Street Memos and took them at face value they reveal that the Bush administration took the WMD threat very seriously.

But have a cold drink beside you it will scare the socks off you.

Depends on who you call "the Bush administration". I just read a book by one who considered himself one of nine, and he wrote "Against All Enemies", and he shows that the bu$hit admin could care less about terrorist threats until ...

And those in the CIA who pointed out the fallacy of the puffy rhetoric of the neoCONS who had an agenda (a decade before bu$hit) which they could fit any 'news', 'intellegence', etc. into so long as it fit the agenda. I mean elastic lad wrote their talking points man.

They were serious about WMD in the sense that they wanted 'the mushroom cloud' rhetoric to scare the serious WMD hell out of you and the rest of us so they would be sitting upon the top of the world oil.

No more, no less.