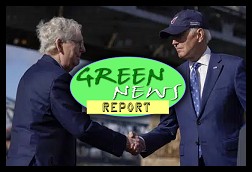 IN TODAY'S RADIO REPORT: Biden promotes bipartisan infrastructure repairs and upgrades as funding flows from new climate laws; U.S. West braces for another round of major storms; PLUS: Republican dysfunction in U.S. House a bad omen for climate policy... All that and more in today's Green News Report!

IN 'GREEN NEWS EXTRA' (see links below): How to prepare for this week's Atmospheric River storm; In famed Mt. Kilimanjaro game park, the animals are giving up; Protests near German village eradicated to expand coal mine; Biden rolls out new rules. Courts may torpedo them; Farewell to the Senate's biggest climate denier; The toll extreme weather took in the U.S. during 2022, by the numbers; Winter warm spell stifles skiing in the Swiss Alps; A hotter, wetter Arctic spells trouble for everyone... PLUS: Alaska’s Arctic waterways are turning a foreboding orange... and much, MUCH more! ...