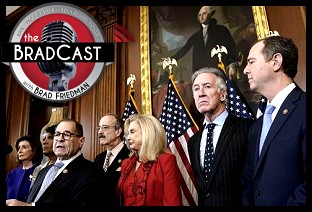 December 10, 2019 is the day that the Democratic-led House of Representatives introduced two Articles of Impeachment for Donald Trump on Abuse of Power and Obstruction of Congress. They're linked there for you to read for yourself, or just click the play button and listen to the show, as I read them for you.

The Democrats played a game of whiplash today as, an hour after introducing the Articles of Impeachment, Pelosi led a press conference to announce that they’ve reached a deal with the Trump administration to pass the NAFTA replacement known as the USMCA. From impeaching the President to giving him one of the biggest legislative victories of his term. Go figure.

We also cover the disconnect between the DOJ’s Inspector General’s report released yesterday and Attorney General Bill Barr’s gaslighting the nation over what it says. And lots more…

We changed the subject for today's interview with RAMESH SRINIVASAN, author of a new book, Beyond the Valley: How Innovators around the World Are Overcoming Inequality and Creating the Technologies of Tomorrow, which is basically an in-depth look into the internet and how it’s fundamentally changed our lives during its short existence.

We finish up with a new episode of Desi and Brad's Green News Report.

Whew. I can’t wait to see what tomorrow brings. On second thought…