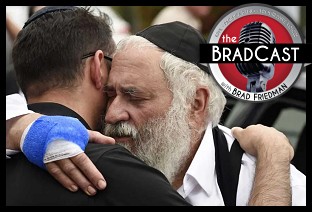 Saturday's Passover shooting at a synagogue in Poway, California, just north of San Diego, was only the latest in a rising spate of Rightwing extremist hate crimes --- rising even over the past week alone! --- as discussed on today's BradCast. [Audio link to show follows below.]

We're joined today by NBC 7 San Diego reporter RAMON GALINDO, who spent the weekend covering the shooting at Chabad of Poway, which took the life of 60-year old Lori Gilbert-Kay and injured three others, including the congregation's Rabbi, after a 19-year old armed with a military-style assault rifle opened fire during Shabbat services. The alleged shooter, who was arrested while fleeing, is said to have been inspired by both the recent attack on two Muslim mosques in New Zealand, where 50 were killed, and the Tree of Life synagogue shooting in Pittsburgh which killed 11 worshipers exactly 6 months ago.

The shooter at Chabad, who posted a "manifesto" just prior to the attempted massacre, is also said to have been responsible for an incident of arson at a nearby Muslim mosque in late March, according to Galindo who broke the story of that fire for NBC San Diego last month. In addition to bringing us up to the latest, including charges that have now been filed, Galindo offers insight on a number of the heroes in the story who he spoke with over the weekend, including both Gilbert-Kay and Oscar Stewart, an Iraq vet and congregant who reportedly ran toward the shooter to stop him as others were fleeing. It was, in fact, a good guy WITHOUT a gun who appears to have prevented far more carnage, though an armed Border Patrol officer at the service reportedly fired shots at the shooter's car as he was speeding away.

We've got a lot to unpack on all of this today, with both Galindo and listeners who call in with their own thoughts and reactions to the shooting (including one woman who lives in the neighborhood), the White House response (denying Donald Trump's obvious responsibility in helping to hasten the rise of white supremacists and other rightwing extremists) and even some thoughts on the Obama Administration's willingness to fold to reactionaries on Fox 'News' and in the Republican Party by withdrawing his own Dept. of Homeland Security's dire draft report [PDF] on the dangerous rise of lone wolf rightwing domestic terrorism in April of 2009.

That (shamefully) withdrawn report stated: "DHS has concluded that white supremacist lone wolves pose the most significant domestic terrorist threat because of their low profile and autonomy --- separate from any formalized group.” (No such fury was issued by the right after a similar report on the dangers of leftwing extremism was issued before it. Both reports were begun during the George W. Bush Administration. Moreover, as Daily Beast reported earlier this month, the Trump Administration has been disbanding DHS efforts to work with state and local officials on issues of white supremacy and domestic terrorism.)

We also talk with Galindo about the editorial decision by some in the media to not share --- or, at least, over use --- the suspects name and why neither of us did so today. As noted, there is much to discuss on today's program...

READER COMMENTS ON
"The Poway Synagogue Shooting and the Continuing Rise of Rightwing Hate Under Trump: 'BradCast' 4/29/2019"
(2 Responses so far...)

Democratic leaders are so cute when they're angry.

Blaming Trump for inspiring the rise of right-wing violence, are you?!

This story is from The Daily Beast. Right after the attack Faux invites right-wing Jewish guests on-air blaming Congresswoman Ilhan Ohmar for the shooting up of Chabad in Poway, California. Take a deep breath and read. I suspect that this horsesh*t will become another problem progressives and others will have to deal with. I don't think anyone asked the guests about the attacker's earlier efforts to burn down a mosque that is a few miles away from the synagogue. I suppose the Congresswoman is to blame for that as well. Throw in a stupid tweet from Ted Cruz also blaming Ms. Ohmar (to which the Congresswoman responds with a tweet of her own) and you know the rightist crazy is going full tilt.

Seriously, though. What the eff is it with conservatives, of all faiths and of none?

Somewhere a new Klaus Theweleit is gathering research in order to write the definitive volume of this historic moment in the United States of America.