It is rather remarkable what one can learn when the presumed private remarks uttered by Republicans and their oligarchic benefactors are captured on secretly recorded audio and videotapes.

Four years ago, Brad Friedman revealed the secretly recorded audiotapes from a Koch Brothers Summer Seminar that captured Charles Koch's "mother of all wars" remark and David Koch's introduction in which he described keynote speaker, Gov. Chris Christie (R-NJ) as his "kind of guy." This was followed by a bombshell in the form of a secretly recorded video that captured Mitt Romney's "46%" remark that the GOP Presidential nominee erroneously believed would be heard only by a group of well-heeled donors.

Now comes a new, secretly recorded audiotape, published by Politico and, subsequently included as part of an in-depth analysis provided by News One. The audio captures Florida Republican state Rep. Janet Adkins at a meeting with the North Florida GOP, plotting to dilute minority representation at the polls by deliberately redrawing Florida's 5th Congressional District so as to include some 18 prisons, disproportionately populated by African-Americans who are ineligible to vote.

Adkins, who is white, described the scheme as the "perfect storm." She explained that if the district was redrawn in this way it would enable Florida Republicans to oust the 12-term, African-American incumbent Democratic U.S. Rep. Corrine Brown. "You draw [the district] in such a fashion so perhaps, a majority, or maybe not a majority, but a number of them will live in the prisons, thereby not being able to vote," Adkins is heard explaining on the recording, after making sure that all the reporters had left the room. (When interviewed by News One, Brown noted that, in addition to the prison populations, there are approximately 6,000 felons living in the newly proposed district whose voting rights have not been restored by the state.)

The secretly recorded audio arrives at a very propitious moment...

During its upcoming term, the U.S. Supreme Court will hear oral arguments in Evenwel v. Abbott, in which, as reported by the Brennan Center for Justice, "a group of Texas residents have challenged [the] longstanding practice" of calculating districts based on the total number of residents, as opposed to the total number of eligible voters --- a distinction that "could have a dramatic impact on minority representation where those populations contain large numbers of non-citizens or people under 18."

While there are several thorny issues that arise in Evenwel, including matters of practicality in terms of the possible unavailability of an adequate dataset for determining the number of eligible voters within a given district, the newly recorded audio reflects the flip-side of permitting gerrymandering on the basis of the population at large --- the ability of race-based partisan manipulation designed to dilute minority voting rights. That issue exists in this instance even though the need to redraw the boundaries of Florida's 5th Congressional District is the product of a well-reasoned, Florida Supreme Court decision issued earlier this year in League of Women Voters of FL v. Detzner.

During her News One interview, Brown, who has served in Congress since 1993, observed that Florida's 5th Congressional District was originally created in 1992 pursuant to a court order in a voting rights case. At that time she became the first African-American from Duval County to serve in the U.S. Congress in 129 years. 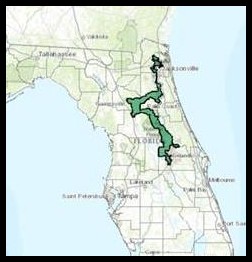 What Brown fails to mention, and what both a trial court and the Florida Supreme Court found, is that the current snake-like configuration of the 5th District (as seen at right) was the product of an illicit attempt by Republicans to gain partisan advantage elsewhere by concentrating the African-American vote inside Brown's "safe" district.

It is a configuration that includes portions of Duval, Aly, Putnam, Marion, Lake, Seminole and Orange counties. While that benefited Brown, who prevailed in her last election by more than 21%, the Florida courts found that, overall, the 2012 GOP exercise in gerrymandering had been cynically designed to achieve partisan advantage.

The League of Women Voters lawsuit created a rift which pitted Brown against "several voting rights groups, including the Florida NAACP," according to the Herald Tribune, "though, the NAACP sided with the Legislature to oppose any major changes to Brown's district."

The Florida Supreme Court ruled that the 2012 approval of the "apportioning" of Florida's 27 Congressional Districts by the GOP-controlled state legislature and its "partisan political operatives" violated Article III, Section 20 of the Florida Constitution. That section provides, among other things: "No apportionment plan or individual district shall be drawn with the intent to favor or disfavor a political party or an incumbent; and districts shall not be drawn with the intent or result of denying equal opportunity of racial or language minorities to participate in the political process or to diminish their ability to elect representatives of their choice; and districts shall consist of contiguous territory."

The Florida Supreme Court upheld the trial court's finding that District 5's boundaries "were drawn to benefit the Republican Party" in violation of the state constitution.

On Aug. 12 Brown filed a complaint in a U.S. District Court and a motion for a preliminary injunction. Brown contended that a "redrawing" of her district pursuant to the Florida Supreme Court's decision would violate Section 2 of the federal Voting Rights Act. On Sept. 3, Brown filed an unopposed motion to stay her case "pending the imposition of a remedial district" either by the Florida legislature or the Florida Supreme Court.

Both actions predated Politico's release of the damning audio which captures Adkins' and the North Florida GOP's race-based scheme to oust an African-American incumbent.

While Brown's attorneys have not yet responded to an email inquiry from The BRAD BLOG, it seems rather obvious that Adkins' damning remarks reveal a cynical purpose that violates both the above-quoted section of the Florida Constitution and the Voting Rights Act.

Also troubling, as Brad Friedman noted when he discussed this matter on The BradCast last week, Adkins, during her recorded remarks, appears to express the belief that the U.S. Supreme Court decision to gut Section 5 of the Voting Rights Act (VRA) in 2013 now works to the advantage of Republicans and their various schemes used to suppress the voting rights of minorities and the poor.

"She can't really claim damages until after she has an election and after she loses," Adkins is heard explaining. "Nothing is going to happen to her lawsuit until she is actually harmed."

Prior to the U.S. Supreme Court's gutting of Section 5, jurisdictions sporting an ignominious history of racial discrimination at the polls would have had the burden of proving that a newly gerrymandered Congressional District was neither intended to have nor would be likely to have a retrogressive effect on minority voting rights. The newly drawn boundaries would have to be "precleared" before they could take effect.

While preclearance is no longer required, Adkins may have erred in her claim that "nothing can be done" until after Brown lost an ensuing election. The secretly recorded audiotape could well provide the basis for the issuance of a preliminary injunction. A court would not have to await the outcome of an election. It could invalidate the newly drawn boundaries of the 5th District on the grounds that minority voting rights will otherwise be irreparably harmed. Thus, we'll have to wait and see what effect, if any, Adkins' racially motivated remarks have either with respect to the issues now pending before the U.S. Supreme Court in Evenwel or in the ultimate boundaries for Florida's 5th Congressional District.

* * *
Ernest A. Canning has been a member of the California state bar since 1977. Mr. Canning has received both undergraduate and graduate degrees in political science as well as a juris doctor. He is also a Vietnam Vet (4th Infantry, Central Highlands 1968). Follow him on Twitter: @cann4ing.
Tweet
Reader comments follow below ad...

Hey Ernie, the practice of gerrymandering, i.e. drawing district boundaries shaped like strange animals in order to carry out a partisan political strategy, could be eliminated by creating a statutory requirement (or finding a constitutional requirement) that every district must be a convex polygon.

Is there some reason, besides partisan corruption, that legislators and judges do not impose this simple rule?

... that every district must be a convex polygon. / Is there some reason, besides partisan corruption, that legislators and judges do not impose this simple rule?

Some districts may be up against state/national borders or boundaries which (due to things like natural geography) have concave outlines.

Consider the 1st Congressional district in northern West Virginia where it meets western Maryland, Pennsylvania, and Ohio; given the population-dictated sizes of the districts, no redrawing could escape the concavities imposed by the state borders.

Just curious, will there ever be a point where our judicial system develops the cojones to say, "the republican party has broken laws so frequently and with little to no remorse that they should become an illegal organization." that it will be illegal for a candidate to use the republican moniker for a certain number of election cycles. (just like the banksters) Until something like this happens, they will continue to try to break laws and get away with it.

Some districts may be up against state/national borders

Yeah, other than that. You can still draw internal district boundaries to be convex. You could even require them to be rectangular. It's a political problem, not a geometry problem.

Not counting voters outside the state seems obvious.

Brad, that cartoon where all the Republicans are in a circle debating whether to change their policies or cheat should be at the top of your page permanently. For a picture is indeed worth a thousand words, and it is a perfect complement to these articles because they voted unanimously to CHEAT.

Which cartoon, Marvin? Got URL?