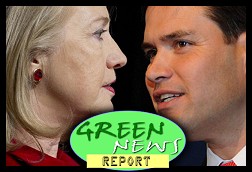 IN TODAY'S RADIO REPORT: Another GOP climate science denier enters the 2016 race; And a non-denier jumps in on the Democratic side; Bad news for Big Coal in China; PLUS: Florida's denier disease is spreading --- now officials in Wisconsin barred from work on climate change... All that and more in today's Green News Report!

IN 'GREEN NEWS EXTRA' (see links below): Climate censorship gains steam in red states; Rapid global warming may be coming sooner than you think; The last time oceans went acidic this fast, 96% of marine life went extinct; Why new study on Arctic permafrost is so scary - it's the microbes; L.A. mayor envision greener city where people walk and use mass transit; 5 years after BP Oil Spill, Obama Admin proposes new safety rules... PLUS: Republican Wins Award For Believing In Climate Change... and much, MUCH more! ...

We can only recover the climate if we have our democracy back. Please join the movement to STOP Election Theft at Kickstarter. This campaign is raising money for Jonathan Simon, author of CODE RED: Computerized Election Theft and The New American Century to promote his book and message to a wider audience.

Citizens of 196 countries with more than 4,764 ports are in danger of port damage and/or shut down at 3 ft. of sea level rise (SLR).

'Warm blob' in Pacific Ocean linked to weird weather across the U.S.