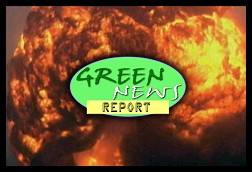 IN TODAY'S RADIO REPORT: Another day, another oil train explosion - make that two; Schizophrenic extreme weather pounds the U.S.; U.S. Southwest about to get a lot drier; PLUS: Ohio bans local fracking bans.... All that and more in today's Green News Report!

IN 'GREEN NEWS EXTRA' (see links below): Shell CEO calls for 'balanced' discussion on climate change; Proliferation of chemicals linked to rise in neurological disorders; Water taps start to run dry in Brazil's largest city; BC First Nations reject another pipeline across their lands; How the White House walked away from 'clean coal'; EPA targeted after preliminary 'veto' of Pebble Mine; Uncertain future for damaged nuclear waste repository; Judge dismisses levee lawsuit against oil and gas industry... PLUS: "More research" into geo-engineering is not such a hot idea... and much, MUCH more! ...