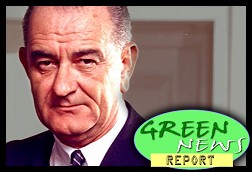 IN TODAY'S RADIO REPORT: Australia's climate change-denying Prime Minister Tony Abbott takes a coal drubbing; Record number of malnourished baby sea lions washing ashore in CA; BP's missing oil has been found - at the bottom of the Gulf of Mexico; PLUS: The first presidential warning on global warming was issued 50 years ago this week... All that and more in today's Green News Report!

Will a protestant vs. catholic climate doctrine alter the current theory that religion evolved via natural selection?