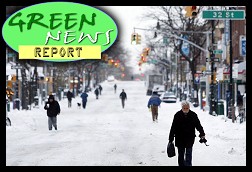 IN TODAY'S RADIO REPORT: Hits, misses and hype in a not-so-historic Blizzard 2015!; The influence of global warming on the storm, with a 100% chance of denial; U.S. Interior Dept. to expand offshore drilling, as another pipeline explodes in West Virginia; PLUS: Obama calls on Republicans to permanently protect the Alaska National Wildlife Refuge... All that and more in today's Green News Report!