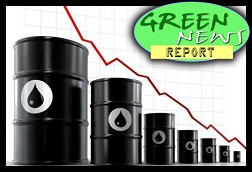 IN 'GREEN NEWS EXTRA' (see links below): FBI allegedly entrapped 'eco-terrorist', withheld documents; NYC bans Styrofoam; GM doubles down on EVs with Chevy Bolt; Saudi prince: "never see $100 oil again"; Climate denier to oversee NASA; Good news for bats and white-nose syndrome; The Serengeti Strategy to silence, intimidate individual scientists... PLUS: The Saudis, Stones, and the End of the Age of Oil... and much, MUCH more! ...

A river drainage system has formed on top of the Greenland Ice Cap.

It has raging rapids.

Some people can only see the ice, not the melt-water rapids (The Ignoratti Preacher Says: "The Ice Age Cometh").

Not all republicans are climate change deniers (Yale Study).