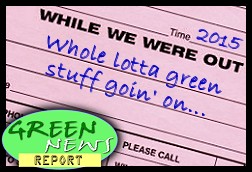 IN TODAY'S RADIO REPORT: WHILE WE WERE OUT: The planet had its hottest year in recorded history; EPA issued new coal rules; Vermont shut down a nuclear plant; Germany broke more renewable energy records; China announced the closure of 2000 coal mines; Republicans take over; PLUS: The planet loses another champion... All that and MUCH more in today's Green News Report!

Great coverage Des. Thanks to Brad too.

There is some serious news concerning arctic methane.

Dredd - Not to suggest Guy McPherson is wrong in his predictions of doom, but just to suggest there are some reasonable critiques of his analysis worth at least being aware of.

He does no personal research in the lab anymore.

He resorts to quoting scientific papers filed in peer reviewed journals and admits to "cherry picking" at times:


I’m often accused of cherry picking the information in this ever-growing essay. I plead guilty, and explain myself in this essay posted 30 January 2014.

(Climate-Change Summary and Update). Those opposing his "abrupt climate change" & NTHE positions do not deny climate change, they just disagree on the WHEN ... the dates ...

Even Dr. McPherson hopes the early dates are wrong, nevertheless he reports those scary things some scientists say. And he gives talks at events where he interacts with his critics in a friendly way. He does not dislike his critics who he appears with.

Noam Chomsky and Chris Hedges have an interesting discussion on urgency in this video: https://www.youtube.com/...bedded&v=-9sxGj45eDA

Personally, I have noticed that predictions of dates of future events very rarely are highly precise.

But, trends and eventualities can be forseen, and we call those who forsee them "prescient."

For example, those (e.g. Tyndall, Arrhenius) who in the mid 1800's told us that excessive C02 emissions could warm up the average global temperatures.

Callendar, Plass, & Hulburt wrote of it about 100 years ago,

Suess & Revelle did a paper in 1957 warning of GW dangers (Dr. Revelle warned of polar ice cap melt in a TIME mag interview ~60 yrs. ago).

As you say, there is much disagreement on dates, but not very much at all on the direction we are headed.

This includes the mainstream scientific community, who have been off on their dates too (e.g. many things have happened sooner than they expected or predicted).

So the risk of prediction is that the events predicted can happen earlier or later than expected.


"It is my view that our climate system is in early stages of abrupt climate change that, unchecked, will lead to a temperature rise of 5 to 6 degrees Celsius within a decade or two," Beckwith told me. "Obviously, such a large change in the climate system will have unprecedented effects on the health and well-being of every plant and animal on our planet."