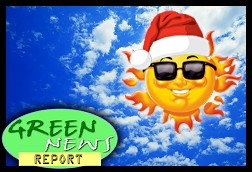 IN TODAY'S RADIO REPORT: 2014 on track for hottest year on record; Washington state governor proposes a carbon cap and trade system; Plastic trash pollution in the oceans worse than previously known; PLUS: Innovative solar energy breakthrough out of Australia... All that and more in our last Green News Report of the year!

The Pope weighs in on Climate Change in a big way.

Hurry, hurry, step right up, get your tickets before they are sold out: Koch Brothers vs. The Pope ... the climate change fight of the century ...

Brad, Perhaps Useful Information about a successful approach to Democracy. Link TV had the following wonderful programming about the legal work done by Thomas Linzey and the Community Environmental Legal Defense Fund, which should be spread widely for its potential application to Democracy and Voting Rights in addition to its already stated work on environmental rights and its track record of successful, local, democratic lawsuits against abusive corporations:

EARTH AT RISK: THOMAS LINZEY
Thomas Linzey, co-founder of the Community Environmental Legal Defense Fund, delivers the keynote address at the Earth at Risk 2014 conference in San Francisco, California. In his speech, he discusses how to force change and why more than 200 municipalities are lobbying the federal government to pass laws that restrict or ban factory farming and fracking.

* Each School reveals how it came to be that the law enables corporate managers to dictate their values, and impose their projects on communities.
* Includes an intense, comprehensive history of the judicial bestowal of constitutional rights of persons on corporations.
* Learn the secret of how People’s Movements have cut to the essence and won their struggles to be “found” in the constitution.

* And learn about earlier Movements, including the Levelers and the Diggers.
* Experience the story of Pennsylvania communities, and New England Town Meetings, as well as North Western city battles – in the ongoing struggle to take the power to govern out of the Corporate Boardrooms and put it back in our communities where it belongs.