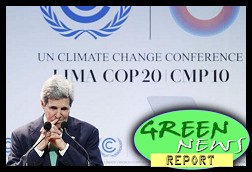 IN 'GREEN NEWS EXTRA' (see links below): Russia’s militarization of the Arctic; 7 psychological reasons stopping action on climate change; Study gauges total plastic pollution in ocean; The big hidden energy story unfolding - and it's not oil; Unraveling the El Nino mystery; Should solar homeowners pay for grid maintenance? ... PLUS: How Solar Power Could Slay the Fossil Fuel Empire by 2030... and much, MUCH more! ...

Kerry does not understand the impact that hypocrisy has on people outside our culture.

Within our culture we are inundated with official hypocrisy constantly, so we notice it less.


But it has, and there’s no debate among the world’s scientists about which country is “most responsible.” That is, about which nation has injected the greatest amount of the heat-trapping invisible gas CO2 into to the atmosphere, where a lot of it remains for years, piling up and only adding to the heat.

The answer: United States has, with China a distant second.

And figured on a per person basis, the “most responsible” is the United Kingdom, with the United States a close second, Germany a close third, and China a distant seventh.

If you’re surprised the “most to blame” isn’t China, the explanation is simple:

In about 2007, China did pass the United States in putting the greatest amount of CO2 into the air per year, but China’s economic boom only got started recently and they still have a couple of decades to go (if there are no drastic changes) before they catch up with the United States in the total cumulative amount of heat-trapping CO2 they will have been piling up in the air.

(Choose Your Trances Carefully - 2). Then consider how Kerry's personality comes across at COP-20 when he lectures third world countries about how they should cut their pollution.