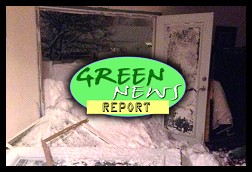 IN TODAY'S RADIO REPORT: Record-breaking extreme winter storm breaks Buffalo, NY; It's official: October 2014 hottest October on record; Sorry, Republicans: China will cap coal use by 2020; PLUS: Obama doubles down on climate foreign policy... All that and more in today's Green News Report!

« PREVIOUS STORY "Extreme Weather? What Extreme Weather?"
» Go to The BRAD BLOG front page «
"'This is How Clever Satan Is': Exposing Those Monster Energy Drinks for What They Really Are!" NEXT STORY »

« PREVIOUS STORY "Extreme Weather? What Extreme Weather?"
» Go to The BRAD BLOG front page «
"'This is How Clever Satan Is': Exposing Those Monster Energy Drinks for What They Really Are!" NEXT STORY »
See MSVL and support BRAD BLOG! Click here for signed premium version!