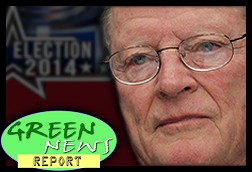 IN TODAY'S RADIO REPORT: Election 2014 Environmental Democalypse Now: get ready for the Republican hegemonic hellscape; Climate denier caucus now in charge; PLUS: At least one note of very good environmental election news... All that and more in today's Green News Report!

IN 'GREEN NEWS EXTRA' (see links below): Energy storage breakthrough revealed; Fracking frenzy brings fears of boom-bust cycle; Peak water in U.S.; New Koch Industries video: "we rearrange your polar bears"; End the GMO madness: try mandatory labeling; GOP wins deal blow to US climate change leadership internationally; Maine's shrimp season cancelled for lack of shrimp ... PLUS: The biggest loser in this election is the climate - and the children of 2100 ... and much, MUCH more! ...

"Abrupt climate change" is being noticed more and more.

One abrupt change that is still under the radar is the significant decrease in tornado counts (On The Origin of Tornadoes - 5).