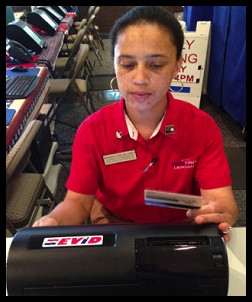 The state Democratic Party filed an emergency Motion for Ex Parte Relief [PDF] earlier this evening seeking to compel Broward County election officials to keep polls open until 9:00 p.m. They alleged, among other issues, that an "EVID system throughout the day has prevented voters from being able to update their address on the day of the election, as they are permitted to do by law."

Instead of being allowed to vote, voters were "asked to present themselves at the Supervisor of Elections office in order to update their address and return to the polling place at a later time to vote a regular ballot." That and other issues may have prevented the lawful casting of ballots in an extraordinarily close Governor's race...

According to the Broward County Supervisor of Elections website, the EVID "is used to verify a voter’s address, status and signature information at Early Voting and the polls. The voter presents his (or her) Florida Driver’s License or Florida Motor Vehicle Identification Card (with the magnetic strip) to the clerk at the precinct and the card is swiped through the EVID unit, which accesses the voter database and displays the information for the voter so that it can be verified as to precinct, address, etc."

Miami Herald is reporting former Governor Charlie Crist (D) complained that there had been "individual and systemic breakdowns," which also entailed "a polling station that went offline for more than 90 minutes."

Crist, a former Republican Governor turned Democrat, is currently in a deadlocked battle with Florida's current Republican Gov. Rick Scott. If results are as close as pre-election polls have predicted, any problems at the polls on Election Day could become part of a potential legal contest by either candidate.

"Citing early breakdowns of electronic ballot machines and long lines of voters as the scheduled closing time arrived, Crist’s camp appealed to the (17th Judicial Circuit Court of the State of Florida) to extend polling by two hours, until 9pm, in the Democratic stronghold of Broward County. The motion was ultimately denied, although those in line at 7pm were allowed to vote."

Shocking a Florida State Court declined to rule against Governor Scott, with in the past extreme measures used to force a vote total favoring candidate George W. Bush.

By 8:30 am on election day in Broward, Brenda Snipes, SOE had me rescinded as a Charlie Crist Poll watcher. No reason was given. I had already helped voters correct their name and addresses, helped voter who had been shuffled back and forth between precincts with wrong name and address in evid system and wrong voter registration card assignment. Helped voter with machines rejecting ballot analyzed that the ballot itself was defective. The precinct staff and I started to become a real team to try to help voters cast a regular ballot until Snipes rescinded me. There were issues with the evid machine resetting itself early in the morning. Could not further investigate as my Poll watcher status had just been rescinded. During early voting one polling location clerk told me there were hundreds, tons of incident reports. He told me they had to document everything. So someone with lots of cash should be doing public records requests of all incident reports from early voting and election day. In addition they should request the clerk's pm ballot report form from ev and ed.

The Provisional Ballot election day rate in Broward based on the evid failures should be extremely high. There is a good chance many provisional ballots were rejected for being in the wrong precinct, failure to update name and address at the poll, not being registered or having already voted in the system.