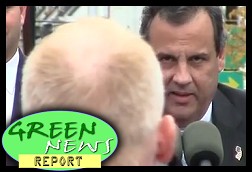 IN TODAY'S RADIO REPORT: 'Sit down and shut up!': Superstorm Sandy recovery stalled, 2 years later; The Weather Channel repudiates its climate change-denying co-founder; PLUS: 'It's not too late': the stark yet hopeful message in the UN's final climate science report... All that and more in today's Green News Report!

One environmentalist replied to the report thusly:


For scientists, conservative by nature, to use ‘serious, pervasive, and irreversible’ to describe the effects of climate falls just short of announcing that climate change will produce a zombie apocalypse plus random beheadings plus Ebola.

Hey Dredd! All I have to say is enjoy your winter cause it's going to be the last one you ever experience. The warmth is a comin' and it's going to make you deader than a doornail as it covers you in it's stealthy coziness. Better move to Alaska before it's too late, and everybody's already there, and they shut the door to you and your fellow climate deniers! You will bake yo butt off and not even know what hit ya.

Cooper @ #2 --- Dredd is a frequent commenter here and is not a climate science denier.

Also: your claims are incorrect. No climate scientist has predicted this will be the "last" winter in North America. They have predicted that global warming will lead to more frequent and intense extreme weather events - including extreme cold events and extreme snow events.

You said it Desi! It's gettin' extreme out there. I heared of friends being taken up "Dorathy style" in tornadas and then popped out of the clouds incased in a big icecube in the middle of summer all the time. But there is hope. The MP3 from the sun will do the trick one day and take down the power grid, and then our worries about the crazy time weather will finally be over. I guess that's why the goberment won't harden it, so we all can be safe from bad weather. I knew they'd do something about AGW. They're track record is damn good. They is of a mind so sublimey and filanthropical and can you say "geneusness," cause we get what we pay for, so they must be smart. I know they will take all those billions in carbon taxes and shower enough of it upon the earth to block the sun as they fly their private jets to and fro accross the planet. Bless you!

Is that the best you can do, Coop? Sad. You climate science denier trolls seem to be running out of material.

Ya blew it, "Cooper" - you violated one of the very few rules we have around here by fraudulently posting under multiple screen names. So gotta put you on comment moderation.