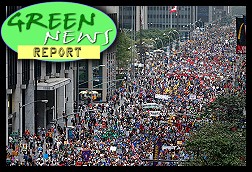 IN TODAY'S RADIO REPORT: GNR Special Coverage: Climate Week 2014 --- the People's Climate March (largest in history), the protests on Wall Street (can ya hear us now?), and the special United Nations Climate Summit (every country on board)... All that and more in today's Green News Report!

IN 'GREEN NEWS EXTRA' (see links below): In a warmer world, Anchorage may be the place to be; Watchdog warns nuke weapon sites at risk from natural disasters; U.S. energy infrastructure revamp may unlock $6 trillion market; Google chairman: ALEC is lying about climate change; Food from Fukushima disaster harms animals; Peanut mogul found guilty for knowingly selling tainted food... PLUS: Why the (awesome) climate march won’t change American politics ... and much, MUCH more! ...

There are a lot of good databases available for those who like to crunch climate data.