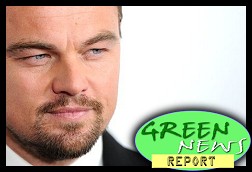 IN TODAY'S RADIO REPORT: Leo DiCaprio takes on his most important role yet; Louisiana's Gov. Bobby Jindal plays his dumbest role yet; Fracking operations confirmed to contaminate water supplies --- again; Black lung coal disease on the rise --- again; PLUS: Polluter front group attacks scary actors and musicians for speaking out on global warming ... All that and more in today's Green News Report!

IN 'GREEN NEWS EXTRA' (see links below): Oceans smash all-tim temp record set 2 months ago; Red Tide off Florida smothering everything in its path; High-stakes climate summit aims to be turning point for climate change; US moves to reduce HFCS; US launches $70m fund to train veterans to install solar panels; Mine spill devastates Mexican farmers; Cuteness: Archbishop Desmond Tutu 'walks the walk' on climate ... PLUS: VIDEO: Naomi Klein on market capitalism vs. climate change ... and much, MUCH more! ...