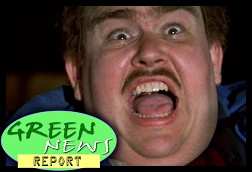 IN TODAY'S RADIO REPORT: Going the wrong way! Greenhouse gas emissions jump at fastest rate on record; Australia's emissions jump after carbon tax axed; Oceans acidifying at rate not seen in 300 million years; PLUS: Some good news: Ozone Hole begone! The ozone layer is bouncing back... All that and more in today's Green News Report!

IN 'GREEN NEWS EXTRA' (see links below): Stopping climate meltdown needs the courage that saved the ozone layer; The Water’s Edge: the crisis of rising sea levels; 5 consumer products linked to illegal rainforest destruction; 97 Hours of 97% Climate Consensus - with cartoons!; Despite overwhelming consensus, some media still unclear on the concept; Study finds living near frack sites may be making residents sick; UK national grid pays companies not to use energy; Is India's PM a climate skeptic?; Montana firefighters call for global action on global warming ... PLUS: We have 5 years to stop building coal plants and gas-powered cars ... and much, MUCH more! ...

America caught Alzheimers from St. Ronnie. Nothing else explains how so many people could be so ignorant and passive against rampant corporatism.