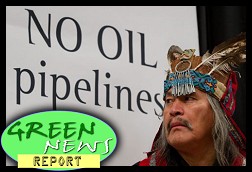 IN TODAY'S RADIO REPORT: U.S. Supreme Court upholds EPA authority on greenhouse gas emissions --- again; It's official - May 2014 was the hottest May on record; Canada's First Nations vote to fight the other tar sands pipeline; PLUS: Titans of Wall Street warn climate change is really, really expensive ... All that and more in today's Green News Report!

IN 'GREEN NEWS EXTRA' (see links below): How Rupert Murdoch created the world’s newest climate change villain; Carbon tax would boost global economy up to $2.6T a year; Autism risk higher near pesticide-treated fields; Save the Bees: widespread impacts of neo-nicotinoids 'impossible to deny; Insecticides put world food supplies at risk; Silver lining: CA drought is stopping spread of Sudden Oak Death disease; Feds failing to inspect over 1k high risk oil and gas wells .... PLUS: These maps show how many brutally hot days you will suffer when you're old ... and much, MUCH more! ...