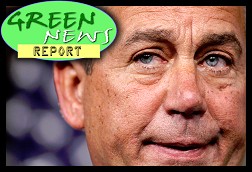 That spirit of cooperation needs to energize the global effort to combat climate change --- a creeping national security crisis that will help shape your time in uniform, as we are called on to respond to refugee flows and natural disasters and conflicts over water and food, which is why next year I intend to make sure America is out front in putting together a global framework to preserve our planet.

« PREVIOUS STORY "Karger Wins Another and the Woeful State of the CA Sec. of State Race: KPFK 'BradCast'"
» Go to The BRAD BLOG front page «
"Scientists Urge World Health Organization (WHO) to NOT Classify E-Cigs as Tobacco Products" NEXT STORY »

If Boehner is not is not qualified to talk about Climate Change, then he is also not qualified to vote on bills that effect the climate.
Most of the questions thrown his way were posed to find out his stance on Global Warming, but he is avoiding the question. We can not continue to avoid the issue because things will change whether we do something about it or not.
Saying I am not a scientist so I can't comment, is giving our kids the excuse that "I am not a lawyer" so I am not responsible for stealing, assault, battery, harassment, speeding, hit and run, etc.
How do irresponsible people like this get "Leadership" positions in our society?

Solar freakin' roadways is not only hilarious, but exactly what we need people to know about to turn climate change and energy crisis/eternal war around. Why wait for our corrupt government to do anything substantial to correct our doomed future. Please, seriously consider people funding our future.

Most politician today are like scabbers, forced to work for the man who only cares about himself not those who make them wealthy. Consider leap froggin' the process. We have little to no time left to save ourselves, and consider the above.

Ain't you tired of watching 100s of thousands die for no good reason but greed and corruption. They are our own. If you don't realize that yet WAKE UP.