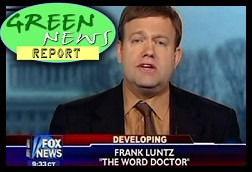 IN TODAY'S RADIO REPORT: Drought decimating Oklahoma wheat crop; Massive wildfires in Alaska; Strongest May hurricane on record in Pacific; California's oil is too hard to frack; PLUS: The politics of language: Americans care about climate change - just don't call it 'climate change'... All that and more in today's Green News Report!