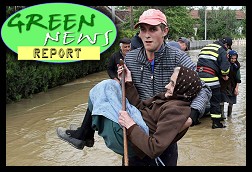 IN TODAY'S RADIO REPORT: CA Governor warns climate change is here, and getting very expensive; Biblical flooding in Bosnia, Serbia and Croatia; Insurance Co. sues Chicago for failing to prepare for climate change; PLUS: India's new PM pledges solar across the nation... All that and more in today's Green News Report!

Hello, just wanted to let everyone know that you can support the victims of the flooding by playing the lotto. Here at Multilotto, we are giving €1 for every line played. Learn more here: http://www.multilotto.co...upport-serbia-and-bosnia

Whether you play the lotto or do something else entirely, please do what you can to support the victims of flooding in these difficult times. Thanks