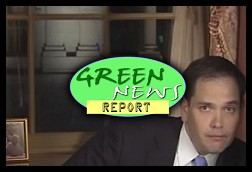 IN TODAY'S RADIO REPORT: Yep, looks like we broke Antarctica; President Obama wants to take action on climate change --- while Not-President Rubio definitely doesn't (lucky Florida!); Severe weather whiplash smacks the country; Spate of coal deaths around the world; PLUS: Solar panels finally back on the White House roof... All that and more in today's Green News Report!

Another "unintended consequence" of the runaway ice melt in Antarctica that is mentioned in this post, is the torque and pressure cause by unexpected rise in the Earth's crust:


Due to the increased melting of ice from global warming, the shrinking ice sheet has caused changes in the ground underneath. However, these changes were thought to be an instant and elastic movement of the crust that was soon followed by a gradual uplifting of the crust over a period of a few thousand years. The GPS data gathered by the researchers showed that the ground in the area was rising much faster than previously thought. The team's measurements suggest that uplifting process pushes up the ground by around 15mm per year. The number is much higher than what the previous studies suggested.

"You would expect this rebound to happen over thousands of years and instead we have been able to measure it in just over a decade. You can almost see it happening which is just incredible," said Grace Nield, the study's lead researcher from the Newcastle University. "Because the mantle is 'runnier' below the Northern Antarctic Peninsula it responds much more quickly to what's happening on the surface."