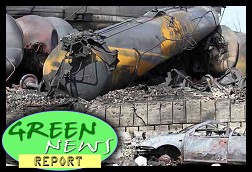 IN TODAY'S RADIO REPORT: Stanford University breaks up with coal - billions of dollars of it; It's official: fracking causing earthquakes in Oklahoma; Fracking also increasing traffic fatalities; Koch Brothers conning your grandmother; PLUS: New rules for the deadly 'Ford Pinto of rail cars'... All that and more in today's Green News Report!

IN 'GREEN NEWS EXTRA' (see links below): Protecting communities of color from industrial pollution; How the US stopped its fisheries from collapsing; Why wave power is lagging behind as an energy source; Judge rules victims of Citgo’s criminal pollution not entitled to compensation; Marco Rubio accuses Obama of not being a meterologist; Judge smacks down 'wind turbine syndrome' lawsuit; NASA to grow lettuce in space; Japan testing space-based solar energy transmission; Solar cells the size of a pencil point ... PLUS: Is a Godzilla-sized El Nino heading our way this fall? ... and much, MUCH more! ...

Our results, using seismology and hydrogeology, show a strong link between a small number of wells and earthquakes migrating up to 50 kilometers (31 miles) away.

Thanx for the GNR KIds.)