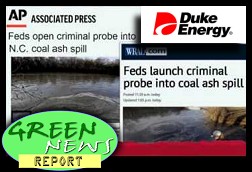 IN TODAY'S RADIO REPORT: Secret federal memo warns entire nationwide electric grid could be knocked out; More new evidence NC collaborated with Duke Energy to derail lawsuits; BP is back in the Gulf, baby!; PLUS: Surprise! Paris discovers stopping traffic really does stop pollution ... All that and more in today's Green News Report!

« PREVIOUS STORY "How Legitimate is Crimea's '96.7%' Referendum Result?"
» Go to The BRAD BLOG front page «
"When Activists in Taiwan 'Occupy', They OCCUPY..." NEXT STORY »