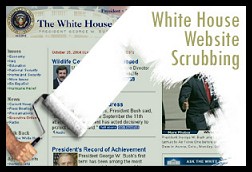 I've been looking back at some of our most noteworthy stories over the years, in the course of reflecting on The BRAD BLOG's 10th Anniversary.

As I was digging into the archives, I was reminded again that while many folks know us for our coverage of election integrity issues, voting machine problems, whistleblowers, etc., it was our scoop about a story concerning the George W. Bush White House in the lead-up to the 2004 President Election that was our first to "go national" and have a direct effect on the national political discourse.

It was before we had even begun digging as deep as we eventually would on the e-voting beat, and the fallout from the story itself resulted in national pick-up by the MSM, pressure on officials and questions at White House press conferences, an academic study (years later) and, the most fun part, the Bush White House eventually being forced to spend what must have been an enormous amount of man hours restoring date to the White House website in the week before the actual election that year...

That first BRAD BLOG story to be picked up by the national press occurred in autumn of 2004. During the Vice Presidential Debate that October between Dick Cheney and John Edwards, Cheney had pretended to express outrage after Edwards described the U.S. as "having taken 90 percent of coalition casualties" by that time in the Iraq War. Cheney pretended to be infuriated by the charge, and responded that it was "beyond the pale" that Edwards hadn't included the number of dead and injured Iraqis in his count of who had taken the most casualties, as if dead and injured Iraqis should have been included amongst what the U.S. considered to be its "coalition" in Iraq.

Given that the Bush White House had long cited a list of countries (very few of them) which they had tricked into joining their so-called "Coalition of the Willing" --- many of those countries offered little more to the effort than a few dollars, or a handful of non-military advisers, just so the Bush White House could include them on its list --- I decided to check the White House website itself that night to see if Iraq itself was now listed amongst those "coalition" countries.

Turns out, by the time I checked the White House's list that night --- their link to "Who Are the Coalition Members?" was still there --- the page itself had been disappeared without notice or explanation from the website. Thus the "White House Website Scrubbing" story was born. Democratic Underground ran a story of mine on it (and created the swell graphic seen at the top of this story), then then AFP picked it up, then Washington Post did too (Reuters didn't bother to notice until January of 2005) and soon WH reporters were asking Administration officials about it at all at press gaggles.

It turned out that it was more than just that "Coalition of the Willing" page that we discovered had been disappeared from the White House website in the run-up to the 2004 Election. All sorts of inconvenient material --- such as the 2002 video of Bush announcing that he was "not that concerned" about Osama bin Laden (remember, this was pre-YouTube, when space and bandwidth for videos was at a premium) and other stuff they might otherwise have liked to keep from showing up in online videos by snarky jerks --- had also been unceremoniously removed from the White House website as they had geared up for that year's campaign. It was all done, as I reported at the time, in likely violation of the Presidential Records Act of 1978, the law passed after Watergate which made destruction of Presidential documents a violation of law.

And then, just three weeks after our original report and continued ankle-biting, the White House was finally embarrassed enough that they relented and were forced, in the week before the 2004 general election, to spend untold hours restoring terabytes of documents, audio and video to the White House website. It was, perhaps, The BRAD BLOG's first clear victory.

It was also an important lesson in the early years of the blogosphere, that persistence, careful fact-gathering and crowd-sourcing on important issues could move the needle one way or another. That was, of course, back when there were far fewer of us in this "business" and the blogosphere was routinely sniffed at, particularly by those in the MSM, as something far less serious than they.

It would be another four years --- in 2008 --- when our contribution to this matter made it into the official history books, as a study at the University of Illinois Urabana-Champaign, "Airbrushing History, American Style" documented The BRAD BLOG's findings in an academic paper and confirmed the George W. Bush White House's apparent violation of the Presidential Records Act.

Unlike too many in the mainstream corporate media who picked up our story as it happened in 2004, Scott Althaus and Kalev Leetaru, the authors of the Cline Center study at the University of Illinois, were kind enough to give us credit for having made the discovery and having documented for history in the first place.

See the most noteworthy stories from our "White House Website Scrubbing" series here.

And please consider a donation to The BRAD BLOG, to help us continue this type independent reporting, trouble-making and muckraking for as long as possible!

I'd be very happy to send a signed DVD copy of the award-winning documentary Murder, Spies & Voting Lies: The Clint Curtis Story by Patty Sharaf to supporters who either donate $50 or more below or, preferably, sign up for "Monthly Sustaining Support" at $20 or more. The film (which I'm in, but it's good anyway) tells the remarkable, funny and, yes, terrifying story of a Republican software programmer-turned-whistleblower's allegations of vote-rigging software said to have been requested at a very high level. It's based on the startling story we originally broke in late 2004 (also in our first year!) and continued reporting on for years thereafter.

Thanks in advance for your support!...