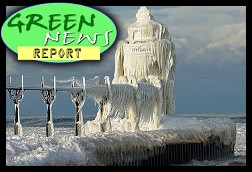 IN TODAY'S RADIO REPORT: Baby it's record cold outside (but only in the U.S.); PLUS: It's that time of year again --- deniers pretend snow and cold means no more global warming ... All that and more in our first Green News Report of the year!...


While the interior of East Antarctica is gaining land ice, overall Antarctica has been losing land ice at an accelerating rate. Antarctic sea ice is growing despite a strongly warming Southern Ocean.

(your quote from skeptical science above).

That is not a known, that is an assumption. An assumption that goes against common sense and simple arithmetic:

"As the U.S. space agency NASA announced, the sea ice in the Antarctic has extended over an area of ​​19.47 million square meters at the end of September. That is the highest since measurements began in 1979."

Moreover, the mere extent of sea ice does not necessarily say something about the volume of the ice, because that also depends on the thickness of the frozen layer. And the vast majority of the Antarctic ice mass is located on the Antarctic continent – and there the ice has decreased in recent years as a whole, particularly in West Antarctica."

(NASA Announces New Record Growth Of Antarctic Sea Ice Extent). When are people going to get the fifth grade message that extent is l*w (square area) while volume is l*w*h (cubic area).

Any extent of ice expressed in square meters, square feet, or square miles has nothing to do with the amount of ice.

It only has to do with the area it covers on a flat plane (How Fifth Graders Calculate Ice Volume - 2).

« PREVIOUS STORY "The Fox 'News'-ification of CBS News and '60 Minutes': 'The Cleantech Crash'"
» Go to The BRAD BLOG front page «
"What 'Right' to Vote in Iowa?" NEXT STORY »
See MSVL and support BRAD BLOG! Click here for signed premium version!