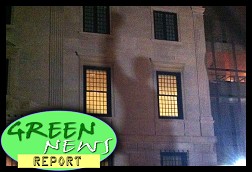 IN TODAY'S RADIO REPORT: The climate action legacy of Nelson Mandela; Historic water compact in the volatile Middle East; Air pollution linked to autism; Water pollution linked to miscarriages; PLUS: Canada is claiming the North Pole because... drill baby drill ... All that and more in today's Green News Report!

Canada says it will try to extend its territorial claims in the Arctic to include the North Pole, although it hasn't yet fully mapped the area, doesn't have the scientific evidence to back the claim and faces major diplomatic hurdles.

Hey Desi, have you seen this:

Yes, we reported that report when it first came out. Rather eye-opening when put into that context, eh? Grist's follow-up also opens up an interesting line of inquiry:

Can you sue Chevron and Exxon for screwing up the climate?