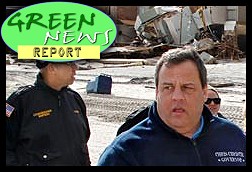 IN TODAY'S RADIO REPORT: One year later: the lessons of Superstorm Sandy - Scientists question rebuilding in coastal areas, warn of future climate impacts & of sea level rise; PLUS: It's official: the Poles are having a heat wave! (No, not the Polish people) ... All that and more in today's Green News Report!