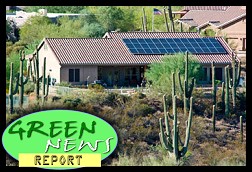 IN TODAY'S RADIO REPORT: Arizona electric company's secret plot to kill solar industry; Hawaiian island rejects being a testing ground for GMOs and pesticides; Washington State fighting GMOs, too; Another U.S. city breaks up with coal; PLUS: Warning: fossil fuels may not be a good investment ... All that and more in today's Green News Report!

IN 'GREEN NEWS EXTRA' (see links below): NYC hurricane expert: "Sandy wasn't the Big One"; Top 10 Food Facts on World Food Day; Australia: Thousands evacuate as conditions worsen; Exposure to DDT may be passed down through subsequent generations; Invasion of the False Widow Spider media stories!; Tea Party Republicans back water infrastructure bill; Monsanto insists Roundup is 'safe' after cancers spike in Argentina; ND pipeline spill raises questions on oversight, inspections; Canada: Spike in carcinogens downwind of petrochemical plants; FDA asks for help as pet deaths spike ... PLUS: Why we don't care about saving our grandchildren from climate change ... and much, MUCH more! ...

Let me begin by an intro here. You could say I have done some advanced homework on the global energy issues.A central issue with many dots in every direction to connect. With ten years in the military I was trained in military intelligence.Yes I have been both underground & have been to Tromso, part of the global electronic cage. And I can say with conviction that military & intelligence are mutually exclusive terms. I am also an energy expert with 15 years in the energy industry, initiated by the loss of my stripmining venture due to interference from the red shield,and ended up working in energy deregulation in Ontario. Your green energy report covers several aspects or issues, all involving the same overall scheme of bringing control to the globalist banksters that own the energy. Play Robin Hood in the west giving to the east until all the wealth is gone, by attacking the basic building blocks that support all life, until... organized grid collapse/bond market economic cascade to collapse/ pandemic from H1N1 & H7N9 recombinant becomes airborne. Then they get the chaos wanted.

Low density energy development is a much bigger scam than getting slammed by the likes of some door knocker. "Slammed" being the slang term for taking your energy business without your real comprehension of what you signed, let alone where deregulation leads. The political opinion on deregulation is...Let them complain about any issue but this dereg thing will continue.Leaders in any business do not police themselves well, as being a public co, the goal is profit no matter the side effects."medical pun intended". There are several goals like; Cause financial ruin. Use only low density generation methods like industrial scale wind, solar, ethanol etc. Place nuclear on dangerous ground (Fukushima D.)additional global radiation compliments of drought causing barium salts in geoengineering. Solar is obscured by this, reducing effects of efficiency by an easy 30%, even in AZ! One former boss sold his interest for perhaps 50 mil a couple of years after going public and is now doing solar in California. Industrial scale wind is more dangerous, because living near one will kill you very slowly. Ethanol forces up food prices using too much land for it with the goal of starving the third world. The most valuable commodity there is,is energy and the best currency you can have. Since advanced methods can draw too much attention, you will want to use small scale wind & solar to generate it's storage in liquid tanks of hydrogen. Great for driving when there is no grid or on rolling blackouts. The most plentiful source there is using public access tier 2 science. If you're tinkering reaches generation of what is called 40% overunity in any open system, you will get visitors you don't want. This has happened several times. There is a great deal more to learn which this comment can only peak into. Please feel free to have a look at my research results since it began on 9/11. I have an obscure blog with nothing to sell accept your comprehension of the nature of life and that of your own which has been stolen from humanity. This will take some physics for laymen too. See: www.authorthat.wordpress.com The Blogathon Philabuster.