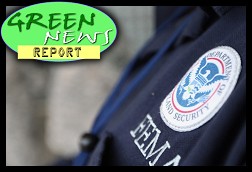 IN TODAY'S RADIO REPORT: Non-essential FEMA workers essential after all, as potential hurricane threatens Gulf Coast; Russia charges Greenpeace activists with piracy; Tesla electric car battery catches fire; Do cities have a right to ban plastic bags?; PLUS: What the corporate media didn't tell you about the new UN climate report ... All that and more in today's Green News Report!