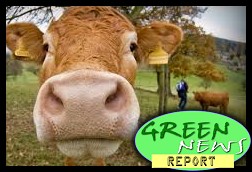 IN 'GREEN NEWS EXTRA' (see links below): "Fatberg" ahead!; Will global warming lead to more war? It’s not that simple; NM farmers draining aquifer for fracking; Climate changing faster that in past 65m years; IG to probe State Dept conflict of interest; Fukushima: radioactive water 'emergency'; Gag order for 2 kids over fracking; Starved polar bear perished due to record sea-ice melt; Wind energy fastest-growing energy source in US ... PLUS: Screw Your Salmon And Your Virgin Wilderness, Alaska, America Hungers For Molybdenum! ... and much, MUCH more! ...

« PREVIOUS STORY "Thank You, Congressman Sensenbrenner. (Seriously.)"
» Go to The BRAD BLOG front page «
"Why Rep. Brownley Voted Against Amash-Conyers, and Why Her Vote Helps Protect the NSA's Continuing VIOLATION of Civil Liberties" NEXT STORY »

I really like the one about Fox news being an ignorance generator.

There are some new reports for neoCon deniers to ignore.